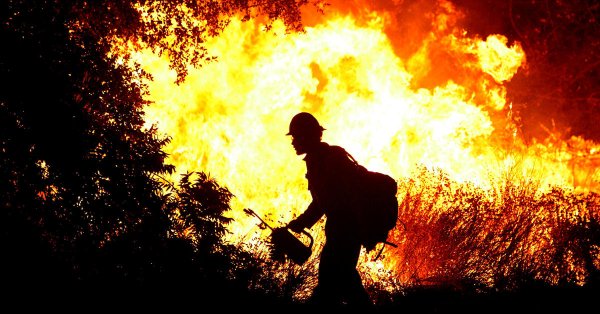 Days after IndyCar Series driver Charlie Kimball signed with Carlin Racing for the 2018 season, he and his family received devastating news.

Kimball’s parents, who live in California, had their home and avocado orchard destroyed by the devastating California wildfires. Kimball and his wife, Kathleen, flew from Indianapolis to Los Angeles to help clean up and rebuild the farm.

Kimball told Racer.com that he didn’t think his parents’ home and orchard would be destroyed, but the way the wind was blowing made things worse.

“Honestly, the timing for something like this is always terrible,” Kimball said. “But the timing that Kathleen and I could literally drop everything ? bar a couple of rejiggings and apologies to a couple of appearances at PRI ? pack a bag, be at the airport in 20 minutes, be on a flight an hour later, and be out here.”

Related: Man leaves the road to risk his life during California wildfires, and you?ll be surprised what he saved

Several people in the racing community reached out to help Kimball and his family, including former teammate Graham Rahal.

“I’m glad that we could do it and be here,” Kimball said. “Having had the opportunity with all six of us [family members], pulling as one in a singular direction has been extremely rewarding. Up at 5:30 every morning, falling into bed at 10 o’clock at night, sitting around the kitchen table at 6 a.m. to make a plan for the day, everybody’s job-lists.”

Kimball said he wants to help rebuild the community, and he said he’ll do whatever he can to help the people impacted by the wildfires throughout the state.

He cited J.J. Watt as an example of what an athlete can do for a city’s relief efforts. Of course, he doesn’t expect to raise as much money as Watt did for Houston after the hurricanes, but he certainly feels like he can make an impact.

Hopefully the Kimball family can rebuild what they’ve lost sooner than expected, and our thoughts go out to everyone who has been affected by the wildfires.