Man leaves the road to risk his life during California wildfires, and you’ll be surprised what he saved 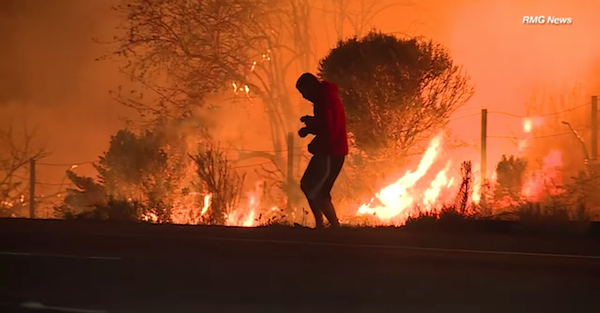 There are still some good people wandering the roads today, risking their own skin to save tiny woodland critters.

In the midst of the Thomas Fire, a massive blaze that had quickly spread to cover 90,000 acres by the time the footage had been recorded, a KABC crew recorded a man frantically scrambling to rescue a rabbit from the wildfire.

The man is seen running and gesturing for the rabbit to come towards and away from the flames. Due to the rabbit’s condition, that being that it’s a rabbit, there is obviously some confusion. Eventually everything comes together, and the man is able to carry the rabbit to safety.

The unknown rabbit’s savior declined an interview after the rescue, so he’s humble and gentle.