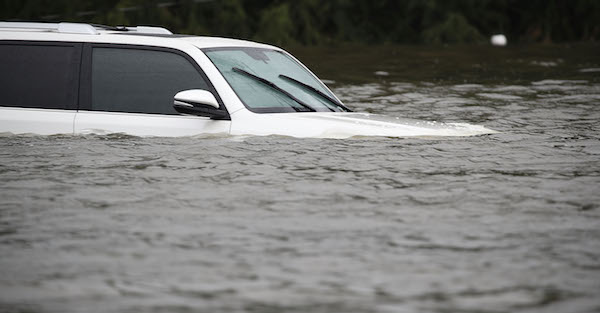 Joe Raedle/Getty Images
HOUSTON, TX - AUGUST 29: A SUV is seen submerged on the street after the area was inundated with flooding from Hurricane Harvey on August 29, 2017 in Friendswood, Texas. Harvey, which made landfall north of Corpus Christi late Friday evening, is expected to dump upwards to 40 inches of rain in Texas over the next couple of days. (Photo by Joe Raedle/Getty Images)

When Hurricane Sandy hit New York and New Jersey in 2012, about 250,000 vehicles were flooded out and permanently damaged. That number could be doubled with the damage done by Hurricane Harvey in Houston.

According to Cox Automotive chief economist Jonathan Smoke, a half-million vehicles could be flooded out by Hurricane Harvey.

“This is worse than Hurricane Sandy,” Smoke said. “Sandy was bad, but the flooding with Hurricane Harvey could impact far more vehicles.”

There are more vehicles per household in Houston than there are in New York and New Jersey, so car insurance companies can expect plenty of work once the flooding stops and people make their way back home.

Related: A Houston convenience store showed no heart by taking advantage of customers during Hurricane Harvey

As a result, auto dealers believe there will be a boost in business when the hurricane damage subsides. Unfortunately for consumers, the price of cars?specifically used cars?is expected to surge due to the demand for vehicles.

It’s also possible that used car dealerships take vehicles damaged from the flood, repair them, and sell them to consumers without notifying them about the prior damage.

Buyers are supposed to be made aware of flood damage when they purchase a vehicle, but some car dealers could attempt to get away without disclosing that information.

If the number of damaged cars is anywhere close to the number expected, the lines at car dealerships and car insurance companies will be chaotic.