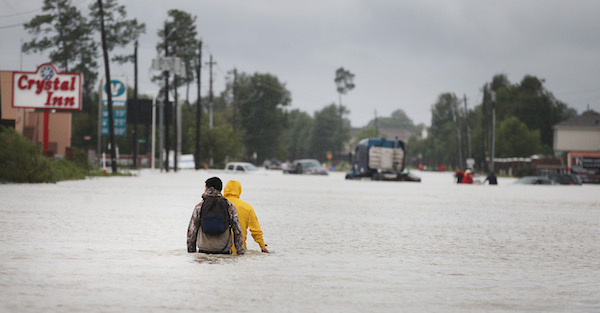 Scott Olson/Getty Images
HOUSTON, TX - AUGUST 29: People make their way out of a flooded neighborhood after it was inundated with rain water following Hurricane Harvey on August 29, 2017 in Houston, Texas. Harvey, which made landfall north of Corpus Christi August 25, has dumped nearly 50 inches of rain in and around areas Houston. (Photo by Scott Olson/Getty Images)

The City of Houston has suffered devastating damage during Hurricane Harvey, and the extreme flooding has destroyed numerous homes and forced people to evacuate.

The demand for gas, water and places to stay have drastically increased since the storm hit, which has led to some unfortunate price-gouging from gas stations and hotels.

According to Texas Attorney General Ken Paxton, there have been complaints of water being sold for $99 a case, fuel costing $10 a gallon, and hotels tripling their rates for needy evacuees.

However, according to Jalopnik, one Houston convenience store has charged an absurd $20 for a gallon of gas.

Related: Prepare for higher gas prices in the aftermath of Hurricane Harvey’s destruction

Spokesperson Kayleigh Lovvorn said they are addressing the issue as soon as they can.

“That convenience store was reported to us in a complaint—we’re tracking all complaints as they come in and following up with persons/businesses involved in price gouging and scams as quickly as we can, and in person if possible,” Lovvorn said.

The gas station was ordered to lower the cost, but it’s a trend that will likely continue as the flooding continues in Houston. Any business that participates in the price-gouging is subject to a $20,000 fine, or even a $250,000 fine if the victim is 65 or older.

If people are victims of price-gouging, Paxton said to discuss the issue with the business first. If that doesn’t work, then they are encouraged to file a complain.