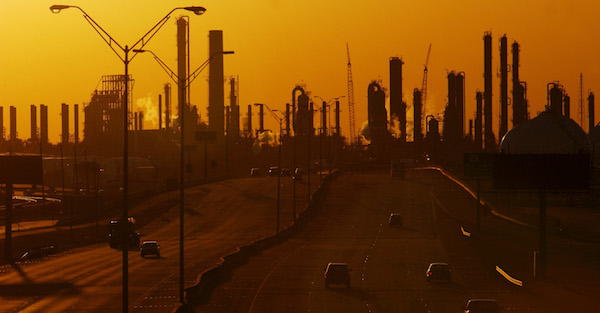 Hurricane Harvey has damaged and destroyed countless homes and buildings in Houston, and it has also forced 10 oil refineries to shut down in the city.

According to CNN, the refineries shutting down will lead to a spike in gas prices. Gasoline futures are at their highest projected levels since July 2015, and they are up somewhere between 5-7 percent.

Gas prices will likely increase in the next week. There is less gasoline available due to less production from the refineries, and consumers across the country will be affected.

Matt Smith, the director of commodity research at ClipperData, told CNN the gas price spike is a direct factor of the refineries shutting down.

“The pop in gasoline prices is an immediate response to the closure of refineries on the U.S. Gulf Coast,” Smith said. “Fears of a supply crunch are sending prices charging higher.”

The price surge shouldn’t last for too long, and they should see a decline after a few weeks. Within a month, the prices are expected to return to normal.

The Gulf Coast turns about one-third of the nation’s oil into gas, so any time a hurricane hits the region, gas prices are usually increased.

The hurricane is still bringing massive amounts of rain to the Houston area, and citizens were encouraged to evacuate. Harvey was a Category 4 hurricane, and the rain will likely continue in the coming days.