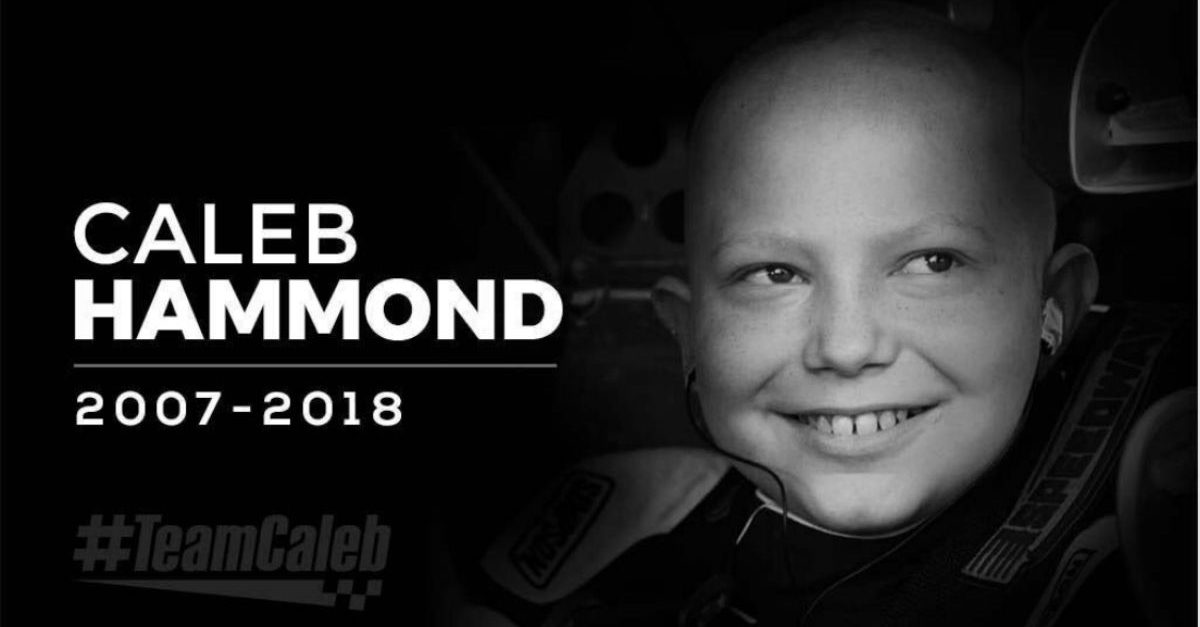 Before NASCAR’s finest took to the track for last year’s Brickyard 400 at Indianapolis Motor Speedway, they all had one person on their mind: Caleb Hammond. Following a two-year battle with B-cell acute lymphoblastic leukemia, the 11-year-old Iowa boy tragically passed away on September 10, 2018.

Caleb’s story was followed closely by members of the racing community, as the avid racing fan’s simple request back in August 2018 to have racing stickers for his casket was met with a massive outpouring by drivers and fans alike. According to ESPN, at least 12 Cup Series and Xfinity Series drivers sported stickers on their stock cars at IMS in honor of Caleb, whose family elected to end his extensive treatment after his cancer aggressively resurfaced following a bone marrow transplant in January. He ended up returning to his hometown of Oskaloosa, Iowa and spent his final days surrounded by friends and family.

We race on in your memory today. 🏁

Our deepest condolences go out to the friends & family of Caleb Hammond. pic.twitter.com/GS5wR3lEDB

Read More: Iowa Boy with Leukemia Goes on Ferrari Ride of a Lifetime at Iowa Speedway

“Our little Mr went peacefully in his sleep at 2:00 a.m. today surrounded by our families,” Caleb’s mother, Holly Kempf, wrote on Facebook. “Before I was woken up being told he was getting ready to pass, he was smiling at me while I was dreaming. With my hand on his chest, I felt his last breath and a few last heart beats.”

Many in @IMS racing in honor and memory of Caleb Hammond today. #TeamCaleb #RIP pic.twitter.com/baNoH8QvBI

I was lucky enough to meet Caleb Hammond @oskychanllenge in early August. What the racing community did for & with Caleb the last month was amazing. Thoughts and prayers to his family & friends. #teamcaleb #calebstrong #RIP pic.twitter.com/viYWSbUtiH

Hurts my heart to see this. As a father, I can’t imagine. Praying for the Hammond family today. https://t.co/ISzEYs9Wh6

So sad to hear this. RIP Caleb https://t.co/ajFILfUQrq

It wasn’t just NASCAR drivers who mourned Caleb’s passing. Laura Mulder met Caleb at an Oskaloosa racing event back in August and, ever since then, had followed his story.

“He will be in my heart forever,” Mulder told USA Today.

“That smile and those eyes forever. They will be with me forever.”