There are going to be two types of responses to this article: The very disappointed, and the very intrigued.

Of all the Harley-Davidson motorcycles in the world, only one can have the "Most Expensive" title attached to it.

If you're a gearhead or bike fanatic, you're probably scrolling through Harley's rarest bikes, then adding a few exclusive mods, and then presuming it shoots fire, lasers, and possibly manages to heat a frozen burrito at the same temperature all the way through.

But, you'd be wrong. It's not about what this bike can do, but what it looks like.

Beauty Is Only Skin Deep...Unless It's Art

The Harley-Davidson Cosmic Starship could be the world's the most expensive motorcycle, if it sells for its expected price tag of $35 million.

This pricey bike made its world press debut at the Bartels' Harley-Davidson dealership in Marina Del Rey, California on October 21, 2010.

Legend has it that the Harley-Davidson bike sold for $3 million in 2012, but apparently it's now back on the market with an amped-up price that reflects its desirability. Even if it never sells for the scorching price of $35 million, it's still in the top five most expensive bikes in the world just for that sale.

Interestingly enough, this particular bike has always been intended for this role, being dubbed the "Million Dollar Harley" before it ever sold.

What's the Deal With the Harley-Davidson Cosmic Starship?

The bike itself is a 2002 Harley-Davidson V-Rod. No modifications. And, honestly, it's a pretty solid motorcycle as it comes.

The thing that makes it different, desirable, and expensive is that American artist Jack Armstrong has turned it into a work of art.

Armstrong is a V-Rod enthusiast, which is why he chose this particular model to be blessed with layer upon layer of acrylic paint and a reported 37 layers of clear coat. 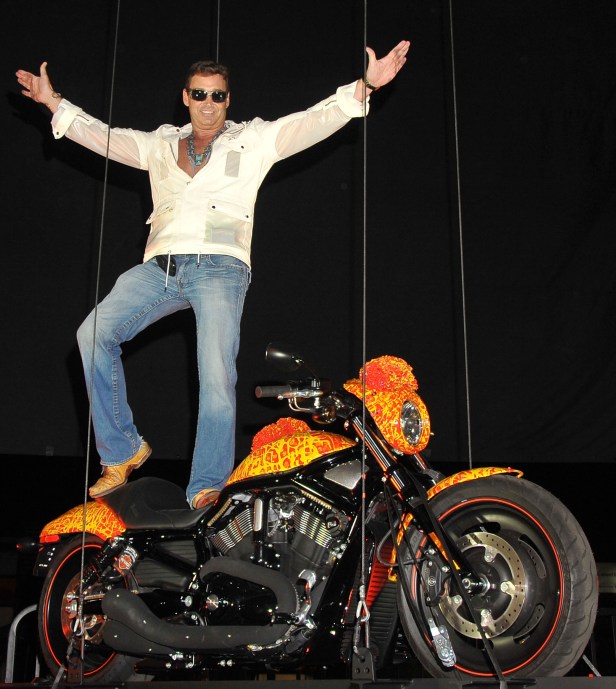 Who Is Jack Armstrong?

Jack Armstrong may be the nephew of famed moon man Neil Armstrong, but he's a celebrated artist in his own right.

The cultivator of an artistic style known as "Cosmic Extensionalism," all of Armstrong's works are consider limited editions. He has created only 100 works of art, ever, and each piece contains actual parts of him. As in, DNA, hair, etc. Art is clearly very personal to him.

The style requires years of patience and loads of paint, swirling, dipping, dripping, and fluidly moving. Unfortunately, Armstrong's art is the kind of thing that doesn't really translate well to photo, because of the actual physical depth of the art from layer upon layer of application.

Extreme texture, abundant colors, and hidden messages that can only be seen from different angles or in just the right lighting are all parts of Cosmic Extensionalism. According to the artist himself, the work is guided by "the energy that coexists in inter planetary and multi-dimensional extensionalism." So, essentially, it was the energy of the multiple universal dimensions channeling through the artist that created this motorbike, rather than the hand of Armstrong himself.

This guy is an actual legend, too. It's said that former collaborator and friend Andy Warhol dubbed Armstrong "The Last Wizard," because of his cosmic connection to the spirit of art.

Allegedly, the Cosmic Starship is living in a climate controlled vault, ostensibly to protect the investment. But, isn't it just a little sad that there's a 2002 Harley-Davidson V-Rod in absolutely perfect condition, not being ridden or loved the way machinery was intended to be loved?