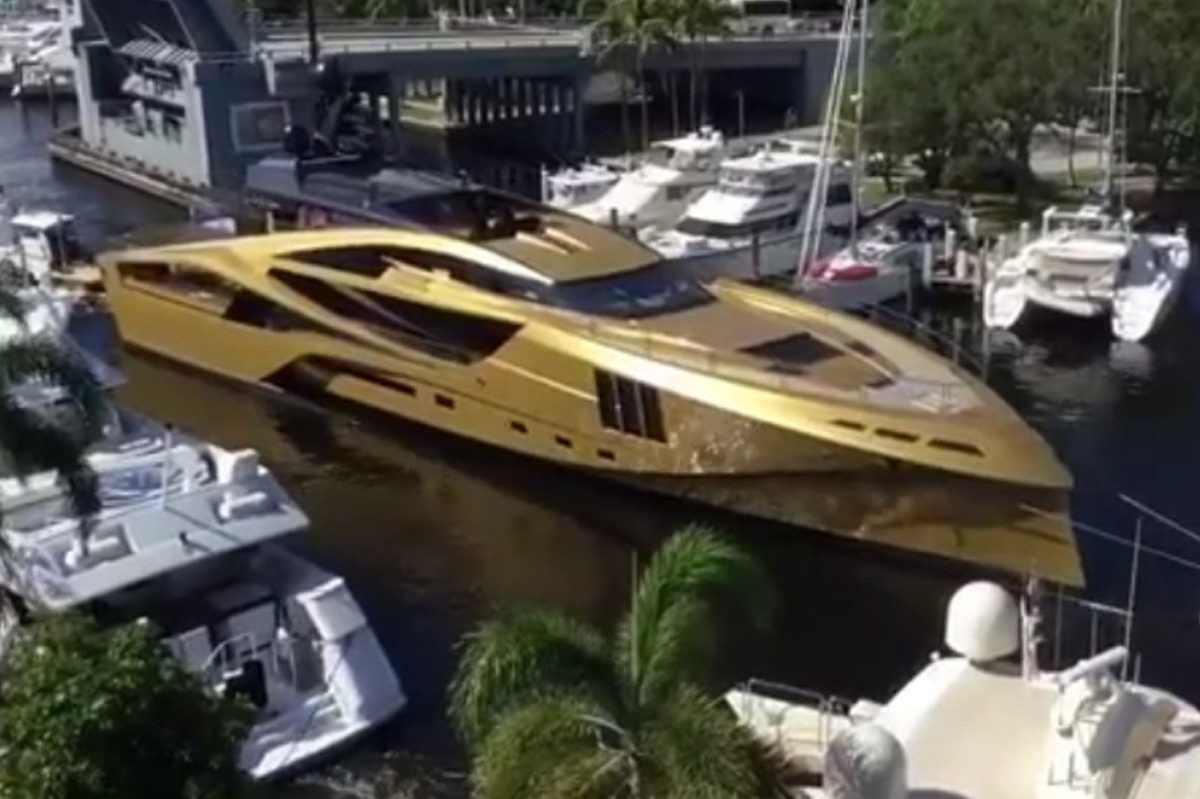 When it comes to superyachts, Khalilah is about as beautiful as its name suggests. Constructed by the renowned motor yacht builders over at Palmer Johnson, this 157-foot (48 meters) yacht is the largest private yacht built entirely in carbon composite. Sporting two MTU 16V 2000 M94 engines that can churn out a combined 5,200 horsepower, this golden SuperSport yacht can reach a maximum speed of 32 knots (37 MPH) and a cruising speed of 28 knots (17 MPH).

In the below video, you can watch the massive yacht Khalilah pull into a shipyard in Fort Lauderdale, Florida, making similar yachts look like mere toys.

Timur Mohamed, the owner of Palmer Johnson, and his team clearly had big plans when it came to building a 31-million-dollar luxury yacht that no one had ever seen before.

“We wanted to tick all the boxes of what owners want,” Mohamed told Boat International. “The design intent had a clear and bold goal from the start: to create superyachts that did not compromise speed, efficiency, comfort, and space. Once we had exterior elements we liked, along with the new hull form, the next [goal] was that design, technology, and performance had to be woven seamlessly into the essence of the yacht. We were aiming to capture the hearts and imagination of the discerning and knowledgeable.”

Using expert design techniques, the Palmer Johnson crew definitely delivered in the capturing “hearts and imagination” department. The size of the aft deck is around 360 feet, and with the extensive use of glass paneling, they were able to open up the views of the ship. The largest glass panes are at the main saloon level and, according to Mohamed, they “are the biggest glass panels aside from Steve Jobs’ boat [Venus].”

Read More: Dale Earnhardt’s Yacht Is for Sale and You Have to See Inside

The interior of the SuperSport Khalilah is equally as impressive as the exterior design to make for the ultimate yacht charter experience. We’re talking a state-of-the-art galley that offers al fresco dining, two owners’ master suites, LED lights in the ceiling above the entrance foyer, numerous staterooms, a beach club, sunpads, storage for jet skis, wakeboards, and kayaks, and a jacuzzi. Each of the guest cabins are also personalized in a different way, including the VIP cabin. And that’s not all!

The pilothouse, up a few steps from the main deck, mirrors the progressive styling of the yacht herself. The modern bridge at the centre of it all was designed, assembled and built at Palmer Johnson, with control panels from Praxis Automation Technology. The wide windscreen offers a surprisingly good view despite the pronounced slant. A second, smaller helm station, or “skybridge,” is on the sundeck above.

Modern Edge, an industrial design company based in Portland, Oregon, worked with Palmer Johnson on the design of this stainless steel and GRP console, which fits perfectly with the yacht’s exterior styling and integrates neatly with the Praxis control panels. Wing stations are on fold-out balconies, usually framed by removable stanchions and rails. Like many of this yacht’s design features, they are revealed only on closer inspection.

Talk about yachting done right. Oh, and we mentioned this thing was GOLD, right? Yeah, as in the thing above silver and bronze. Fitting, since this superstructure is definitely what a first-place yacht is meant to look like.