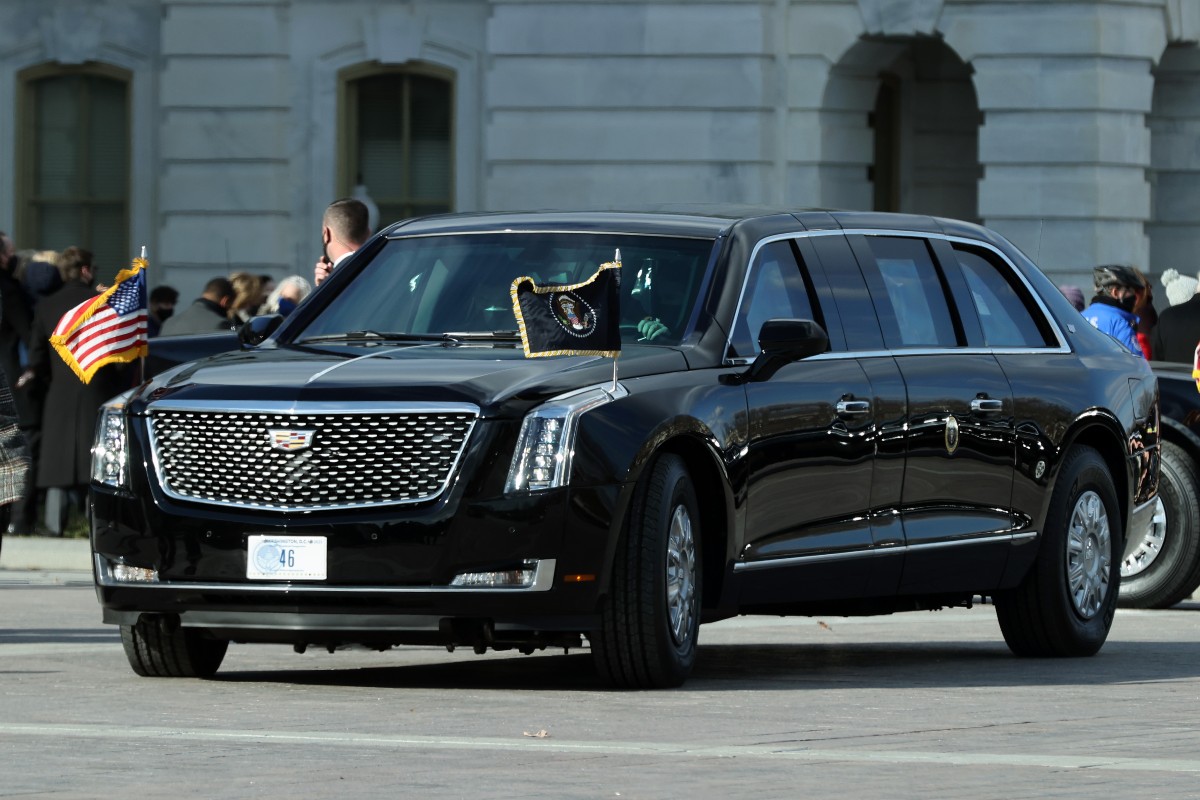 Following his inauguration as the 46th President of the United States, Joe Biden inherited former President Donald Trump’s presidential limousine. At 22,000 pounds, it’s no wonder they call this thing The Beast.

While it took a few laps around the track at the 2020 Daytona 500, The Beast is most commonly seen in presidential motorcades surrounded by Secret Service agents. And, while, at first glance, it may look like just a slightly fancier version of your average limo, this thing is stocked with all the bells and whistles you could possibly imagine.

Here’s everything you need to know about the rolling fortress.

The Beast: History and Specs of the Presidential Limousine

Commissioned by the U.S. Secret Service in 2014, the current Beast limo made its debut in September 2018 in New York City for the United Nations General Assembly. The new Beast (the name has been around since 2001) is designed to look like a Cadillac CT6 like previous presidential limos, which is where the “Cadillac One” nickname comes from. However, the chassis, Duramax diesel engine, which churns out 214 horsepower, and transmission on The Beast all come from General Motors heavy-duty vehicles. The headlamps, tail lamps and grille design still give it that classic Caddy styling.

Specs wise, The Beast, which costs $1.5 million, is built like a rolling bunker. With eight-inch thick plating made of aluminum, ceramic, and steel and five-inch thick bulletproof windows, its doors alone weigh as much as those on a Boeing 757 aircraft. The seven-passenger limo is also equipped with Kevlar-reinforced, run-flat tires from Goodyear, so flat tires won’t slow it down.

Not surprisingly, The Beast is completely stocked with security features. It has an interior that seals off in case of a chemical attack, as well as a special foam that insulates the fuel tank in case of impact. Tear gas canisters, shotguns, and grenade launchers all apparently come as deterrents, along with firefighting equipment, oxygen supply tanks, and even a special suite equipped with a supply of the president’s blood type. The president’s limo, a.k.a. glorified James Bond vehicle, also comes with smokescreen and oil slick capabilities.

Oh, and did we mention The Beast also has its own plane? While the president travels in Air Force One, a C-17 Globemaster transport aircraft hauls the president’s Cadillac limo, a second limo, and an armored Chevrolet Suburban communications vehicle, nicknamed Roadrunner, anywhere that the president is traveling, whether it’s too or from the White House.

The Beast isn’t the only one of its kind. As it turns out, the Secret Service commissioned GM to make around 12 of the armored limos under a $15.8 million contract. These other limos are used for foreign officials and other important visitors.

When he’s on land, President Joe Biden won’t always travel in The Beast. Sometimes, he’ll cruise around in a heavily-armored Suburban SUV, or a modified Prevost bus called Ground Force One. Hey, when you’re the leader of the free world, you get options.