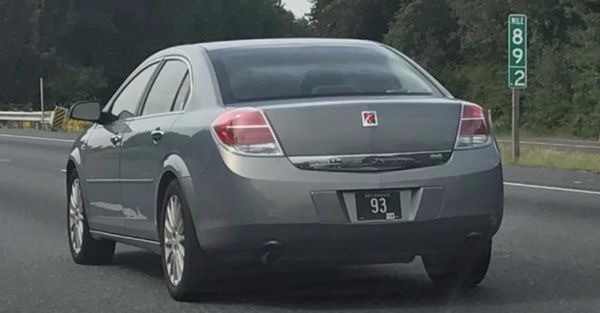 Doug DeMuro, patron saint of quirks and features, knows a lot of obscure car trivia. His latest find is one of the more hilarious.

Doug recently spied what outsiders might think is a typical car driving around in Delaware that will jump out immediately to any Delawarean.

He explains what is so funny about this picture on Autotrader. Sure, to most it is just a 200’s Saturn Aura, worth somewhere around five grand if it is in great shape, but to someone from the small wonder knows that unassuming license plate is worth more than the entire car.

DeMuro explains that Delaware is one of only two states that still gives out numbers-only license plates. And with numbers one, two and three being taken by top state government officials, numbers 4 through whatever can fetch quite a lot of cash.

Doug says someone recently paid $325,000 for the number 14 plate. So, while number 93 won’t command those kinds of numbers, it is surely worth more than the car it is attached to.

DeMuro says these plates are often handed down from generation to generation and most people won’t sell the plates, so it is hard to gauge exactly how much each number is worth. But Doug estimates this one could be worth a cool $100,000.

Related: Here is everything weird about the car from your childhood bedroom wall