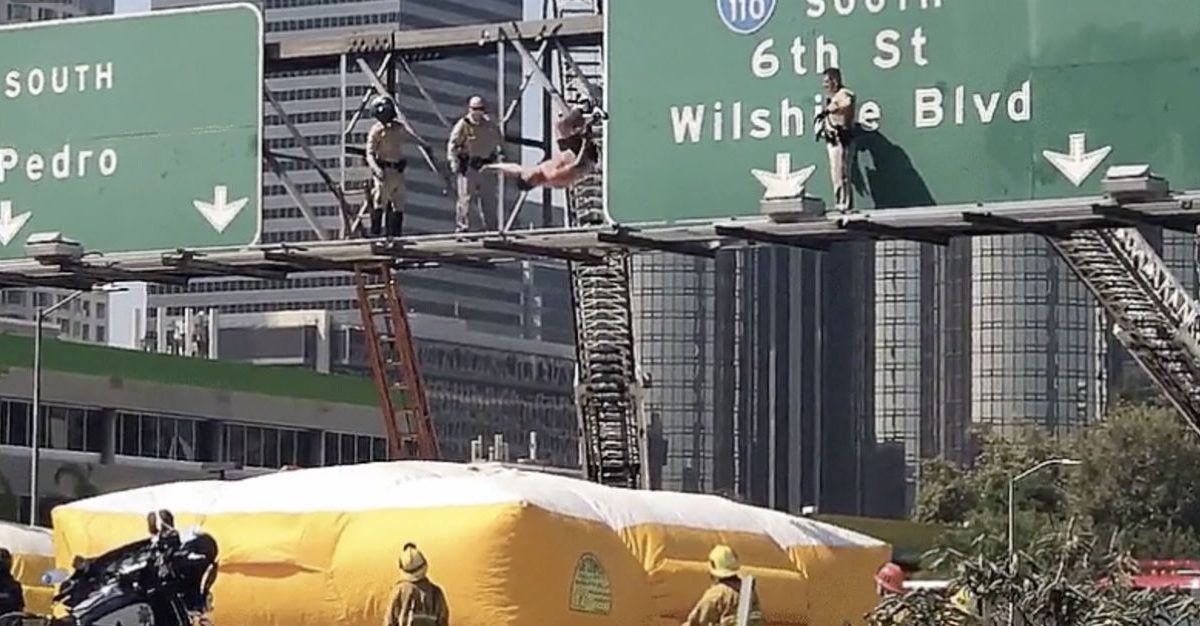 Only in Los Angeles, California would a pollution protestor scale exit signs and cause bumper-to-bumper traffic.

Yep, you read that right.

Early Wednesday morning, the shirtless man with the terrible, awful, no-good plan camped out on the signs to spread his anti-pollution message, effectively backing up traffic on the 110 highway near downtown LA, according to Jalopnik.

Currently on the 110 south. @ABC7 pic.twitter.com/LBgAAhkYPs

First responders were fairly quick to arrive on-scene, as the bullhorn-wielding environmentalist, who apparently goes by Dephree, loudly spread his message with the assistance of such signs as “Fight Pollution, Not Each Other” and “Give a Hoot, Don’t Pollute.”

He just said: “My name is Dephree and I love God.” pic.twitter.com/UXnMLjRkNE

Just when you thought it couldn’t get any crazier than that, Dephree decided to end his traffic-causing demonstration by backflipping onto a inflatable cushion set up by responders.

Dephree has just done a backflip of the sign. pic.twitter.com/d5qh6qybQ6

I hope this is the photo that wins @yamphoto his Pulitzer pic.twitter.com/KO4JoThJft

This is probably one of the craziest methods we’ve seen someone use to cause traffic since that one Houston, Texas woman got naked and danced around on a big rig a couple years back.

It’s highly doubtful that Dephree and Big Rig Lady are related in anyway, but there has to be something in their drinking water, because those folks are damn near crazier than rats in an outhouse.