Police ticket man over $100 for practically nothing, but his wife says it should have been double 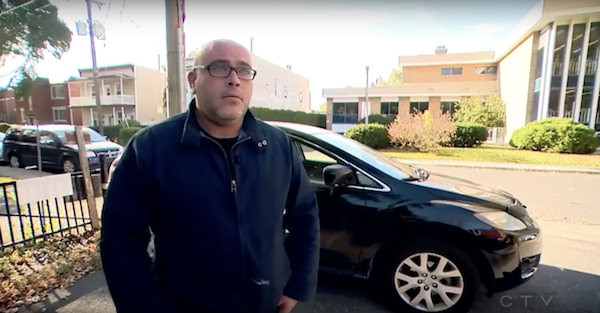 Singing while driving is probably one of the most innocent things a person can do. You feel the beat, start nodding your head a little and before you know it, you?re belting out one of your favorite songs. Usually no one can hear you, so go nuts! Well, for a man in Montreal, his love of 90’s dance music just cost him $149.

On Sept. 27, Taoufik Moalla was driving to the store when ?Gonna Make you Sweat (Everybody dance now)? came on. Like most people, he started singing along to the catchy song and moments later he?s being pulled over by the police. According to montreal.ctvnews.ca, Moalla said:

?I was thinking they wanted to pass, but they called on the speaker ?Please go to the right side. I stopped and four police came, two on each side, and checked the inside of the car. Then they asked me if I screamed. I said no, I was just singing.?

After the police checked his license and registration they returned with a ticket for screaming and a fine for disturbing the peace. Moalla continues:

?I don?t know if my voice was very bad and that?s why I got the ticket, but I was very shocked. I understand if they are doing their job, they are allowed to check if everything?s okay, if I kidnapped someone or if there?s danger inside but I would never expect they would give me a ticket for that.?

Its very hard not to feel bad for this guy, but apparently he is the most understanding person alive as he goes on saying:

?I said ok, thank you, because I know I can contest the ticket. They were doing their job.?

He ended up contesting the ticket, and now awaits his court date. Moalla plans on just simply telling the judge exactly what happened in hopes that it will be thrown out. The best part of this is what his wife had to say.

Ouch! He sounds like one of the people that ends up on a singing contest?s blooper reel.

Related: Canadian police ticketed a driver for the most mundane action