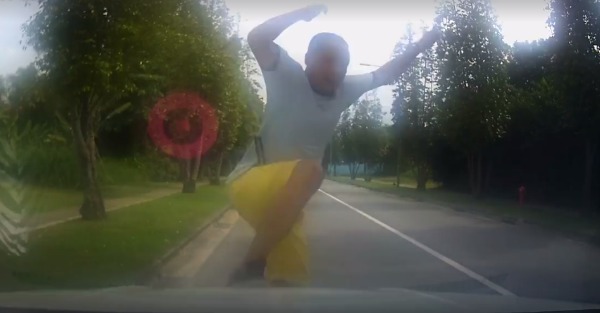 Dash cams are the easiest way to protect yourself from fraudsters like this one. While it is not nearly as common in the US as it is in places like Russia, or in this case Singapore, people looking for an easy payout can be hard to dispute when it is only your word against theirs.

In this instance, all it took to send the faux-victim on his way was pointing out the mere existence of the dash cam. According to StraitsTimes.com, the man taking the dive held up three fingers after jumping onto the car and pushing the driver, Mr. Loo, when he confronted him. Mr. Loo said that he took that to mean that he was asking for $300. That is when Loo pointed to the dashcam and the man realized he had been foiled and stopped asking for money.

Police arrived shortly after to arrest the man who was believed to be drunk by another witness that had called the police even before the incident with Mr. Loo. While it may not happen as often here in the states, a dashcam might not be a bad investment in case someone tries a similar scam on your way to work.