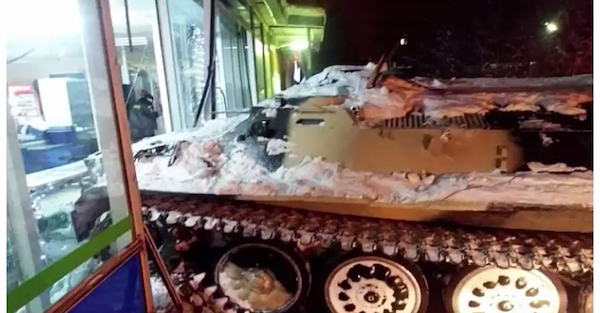 Leave it to Russia to bring just about everything to a whole new height, even a simple concept like going out for a drink.

ZeroHedge.com reported that the man, who was apparently already fairly sauced, allegedly broke into a privately-owned military training compound near Apatity, which is just south of the Arctic Circle, and stole a tank. After accomplishing that feat, he reportedly drove the tank through the woods, into town, and in to a liquor store via the window.

The driver of the tank then popped into the store to filch a bottle of red Myckat wine.

Police later arrested the man for allegedly having the stolen bottle in his possession.

Related: For $550 this place will let you drive a tank over a car. Oh, and shoot a bunch of guns.