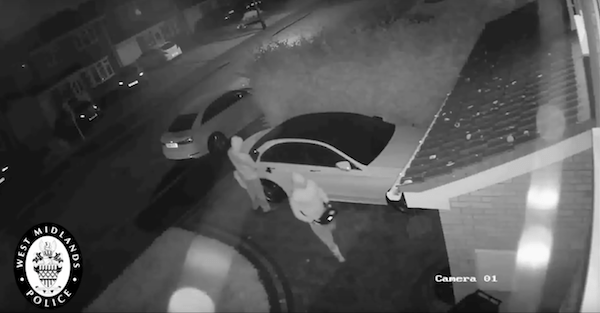 It?s been said that every computer system can be hacked. If made by man, then man can hack it. To prove this theory, hackers have now figured out how to steal new cars that feature keyless entry and push-button ignition.

A new surveillance video from England shows two thieves hacking their way into a new Mercedes. The entire job of pulling up, to driving the stolen car away, takes less than one minute and should be an eye-opener for all auto manufacturers.

Released by the West Midlands Police Department on Monday, authorities think this is the first video footage of a new method of stealing cars dubbed a ?relay crime.? The method uses two relay boxes and requires two hackers. The first relay box is held near the key fob and can duplicate and send it’s signal to the second relay box. The second hacker stands near the car with his box, and when the signal comes through, he can open the door as the car thinks he’s standing there with the actual key. Once in the cabin, you are just a push of the start button away from driving away.

This entire process took only one minute, and these thieves have still not been caught. Police advise using steering wheel locks or to have a tracking device installed. A third and inexpensive option would be a Faraday bag. This small pouch blocks all radio frequencies and thus prevents a thief from stealing your key?s code. You can find them online for less than ten bucks. Take that hackers!

Related: Car thieves claim to be given car keys by a man who has been dead for nearly 75 years