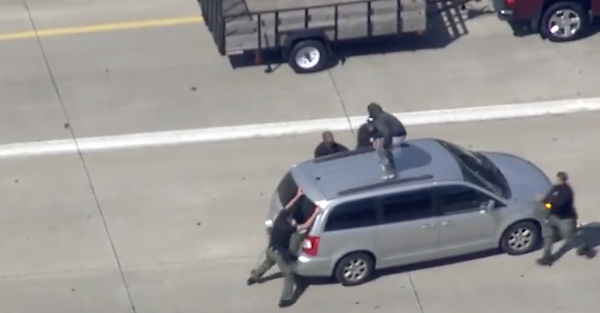 Murder suspect gets tackled by police after chase on I-75

Did you miss how this chase ended?? A homicide suspect climbed a car as it was speeding towards him on the highway – STORY: http://bit.ly/2gPTVEC

Commutes can get a little crazy sometimes. There are seemingly countless things that can serve to make you late: Accidents that block all the lanes, drivers slowing down to rubberneck, and escaping criminals who attempt to outrun the cops by running on top of your minivan. Commuting really sucks.

Yes, that last thing is a real event that actually happened. Fox 10 in Phoenix reported the chase, which happened in Detroit, showing helicopter footage of man pulling his car to the side of the interstate, hopping over the median, and running headlong into oncoming traffic. Just to save you the trouble of watching this through laced fingers, the escaping felon doesn’t end up as a grotesque hood ornament.

No, he runs and leaps on the hood of an oncoming minivan. The strategy, which seems poorly thought out from the becoming, allows him to be surrounded by police and tackled in a move that the WWE would be proud of. Out of the way cage match, here comes the new main event, highway battles.

Related: These are the ten most memorable police chases