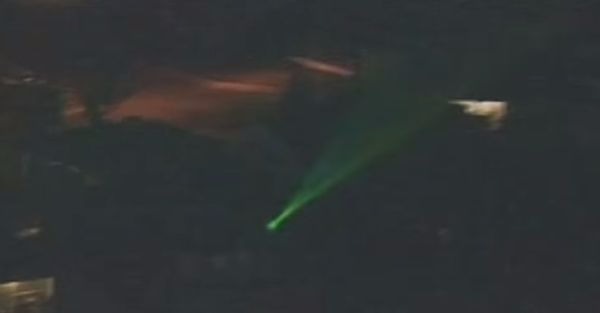 Flashing a laser at an aircraft is not a funny prank. Sure, it doesn’t seem like a little laser pointer could be that dangerous, but just check out what it looks like from inside the cockpit:

It also seems like something that could be easy to get away with, how are they going to track down some guy with a laser pointer when they can barely see where it’s coming from? Well, as one guy found out, they have their ways. Especially when it is a police helicopter that is being targeted.

According to ARSTechnica, a Fresno, California police helicopter was targeted by a man named Michael Vincent Alvarez with a laser. After being targeted, the helicopter tracked down the car and tracked it with its searchlight while ground units were dispatched. According to documents describing the incident, the “high-speed pursuit ended with Alvarez crashing his vehicle into the center divider near Floradora and First Streets. Alvarez exited the vehicle and ran towards 3154 E. Floradora where he was apprehended in the backyard of the residence at that location after a short foot pursuit.”

During the chase, Alvarez was stopping to let passengers out of the car and one of those passengers, according to the cops via Gizmodo, one of those passengers said Alvarez ?thought it would be funny.? Trying to blind a police helicopter pilot is not funny. What is funny, is that Alvarez thought this was a good idea even though, as the police later found out, he had outstanding warrants and drugs in his possession at the time.

He was indicted on federal criminal charges and could be facing up to five years in jail for the laser incident alone.

Related: Canadian police ticketed a driver for the most mundane action