This couple is the modern day Bonnie and Clyde 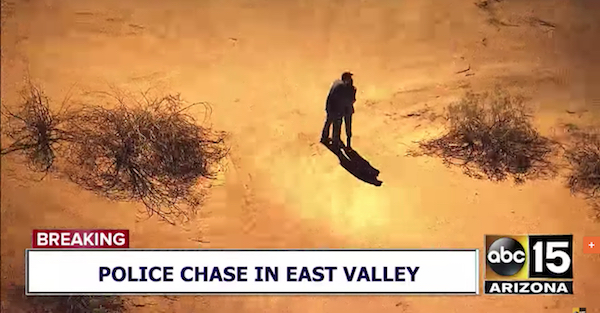 It’s pretty rare that a car chase inspires a desire for romance. But 35-year-old Dustin Perkins and 29-year-old Lovida Flores’ flight from Arizona police in an allegedly stolen GMC Yukon might be featured in a Hallmark movie one day soon.

The chase started in Mesa, Arizona, a Phoenix suburb, when police were unable to pull over the stolen Yukon. The couple eventually fled into a more rural area outside the city before smashing through some fences in an attempt to flee into the desert.

Unfortunately for the couple, they soon found their ride nose down in a ditch and had to continue to run on foot. And just when it looks like this chase is going end like so many others, love intervenes.

The two walk towards each other and embrace beneath the glow of a helicopter spotlight, as police circle closer, eventually arresting the two.

When a Fox10 reporter asked Perkins if Flores was his wife, he answered:

Related: Hit and run driver thought she could get away, until a biker in a Santa suit chased her down