Hit and run driver thought she could get away, until a biker in a Santa suit chased her down 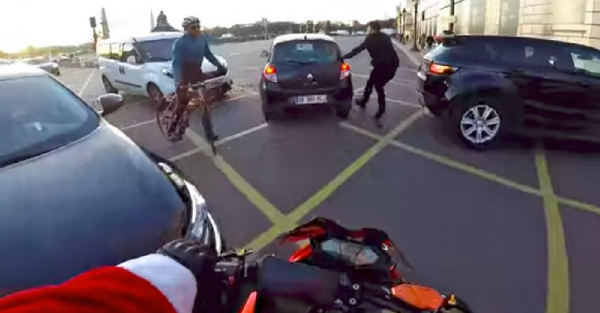 They say Santa Claus is always watching. Luckily for this hit and run victim, he most definitely was.

In the streets of Paris a motorcyclist dressed as Santa was riding around with a video camera attached to his helmet. Fortunately he was able to catch the moment a female driver plowed through a group of people, sending one of them in the air and onto her windshield.

The driver of the car took off and after multiple attempts to stop her, the motorcyclist continued to follow her even after almost being hit by the driver himself.

RELATED: An insane hit and run chase makes a lot more sense when you see the driver

Eventually the motorcyclist saw a couple of police officers and informed them of the situation and pointed out the hit and run driver. The officers apprehended the driver, but that’s not quite where the story ends.

The officers then escorted the motorcyclist through the busy streets of Paris, back to the original crime scene. The motorcyclist talked about his past ambitions to become a cop, but he failed the comprehension portion of the written exam. While he might not be a police officer, he definitely got to experience a day in the life of one on this journey.

If there’s one lesson to be learned from this — remember he’s always watching!