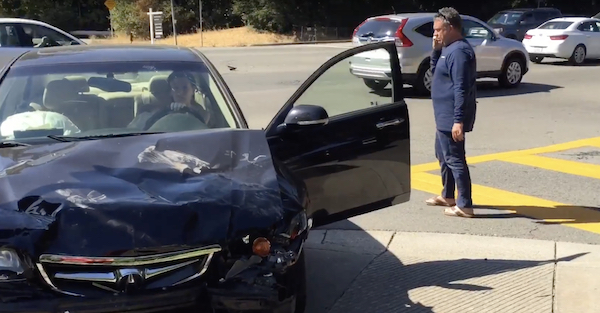 It’s important to remember how dangerous driving can be. There is the risk of harming yourself and others with the steel cage you’re hurling down the road in close proximity to schools, hospitals, and everything and everyone else. But it’s even more important to realize that you are surrounded by people with the same destructive possibilities as you, and that is where the real risk comes from.

A woman is shown fleeing the scene of a hit and run involving an Audi. Apparently the woman rear-ended the SUV before taking off down the street. The Audi gave chase and soon enough our camera man was in the thick of things as well. A quick side note, filming a car chase still qualifies as distracted driving. Don’t make the situation worse by crashing because you can’t put your phone down.

The whole thing quickly winds to an end when the women tries to clear an intersection but ends up plowing into a minivan, disabling her car. No one seemed badly injured, but it quickly became clear that this woman was in need of immediate medical attention. Her speech was slurred, and she had some pretty severe head trauma. It wouldn’t be surprising if she started running because she was concussed and confused.

Related: A dashcammer admits people think he’s a jerk but swears this is the proper way to drive