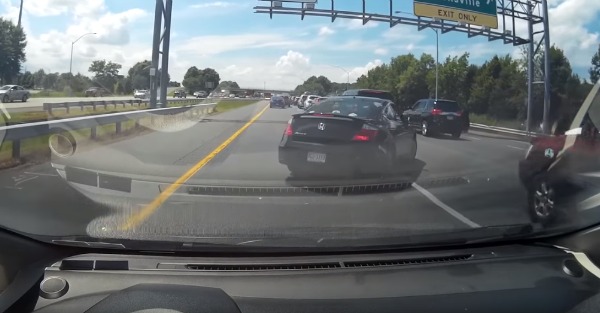 This one is tough. This video will boil the blood of any driver who has ever been stuck in traffic, but the reasons will depend on your understanding of some basic traffic theory.

The cammer says in the video’s description, “Everyone thinks I’m a jerk but this is honestly how you are supposed to merge in congested traffic.” And he is not wrong. As annoying as it is, we are supposed to use the entire open lane until it is absolutely closed. Think about it this way:

A road only has a finite amount of square footage. Traffic is when there is not enough open real estate on the road for the number of cars. If there is a lane closed a mile ahead, no one is doing the traffic any favors by getting over early. In a perfect world, both lanes would be fully occupied all the way up until the point it is closed, at which point, the traffic would merge into one lane. Every other car. The fabled “Zipper merge.”

In theory, this would allow the lane to travel at half the speed of a normal, unobstructed lane. The problem with that theory is that people suck. People never zipper merge. They fight for that extra 12 feet gained by not allowing a car to merge in front of them. Because of this hassle, it is often easier just to merge whenever there is a gap so as not to trigger Mr. Traffic Karma Enforcer straddling two lanes in his SUV to “punish” people for using the empty roadway.

Yes, It is super frustrating when someone recklessly flies ahead to cut in front of everyone stuck in traffic. But use all of the road available to you, merge carefully, and everyone benefits.