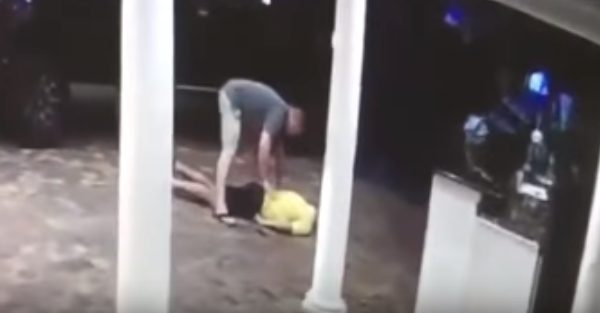 A former cop who told a TV station he punched a valet because he felt threatened ended up getting himself in trouble with the law.

Ft. Lauderdale police said John Henry Kiernan was ordered to appear in court and faced a misdemeanor battery charge back in August
2017 after the incident at a Ft. Lauderdale resort, according to a report by NBC-TV in Miami.

Read More: This Couple Got a Huge Helping of Texas Road Rage and Things Got Ugly Fast

The resort manager said he wanted Kiernan arrested after he was caught on video punching and knocking out valet Rudolph Rodriguez . The men, according to the NBC report, were arguing over an $18 valet fee when Kiernan reared back and punched Rodriguez. With Rodriguez on the pavement, the man identified as Kiernan hovered over Rodriguez’s prone body and appeared to be going through his pockets.

Kiernan told the television station that the dispute was over a parking fee being charged to a person he was hosting at the hotel. He said that he felt threatened because, per his version of what happened, Rodriguez said he wanted to fight him.

Kiernan, who said he’s a former law enforcement officer, said, “Based on everything I have dealt with in my life…and based on his body language, the way he spoke to me, I did feel he was going to go to physical contact. I didn’t know if the guy had a weapon on him. So as soon as he said that I struck him one time and he went down.”

Rodriquez was hospitalized, and the hotel’s manager, Nigel Blair said, “You just can’t assault somebody and expect to just get away with it.”