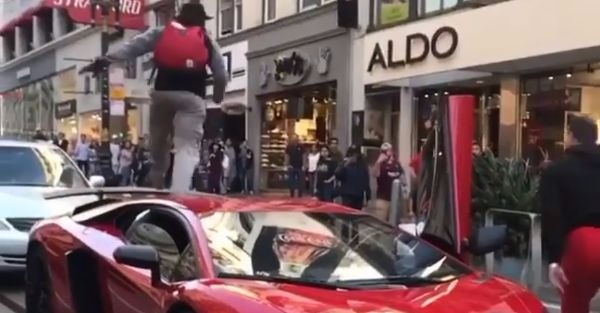 This Instagram video is in two parts, and both will annoy you to no end. After you are sufficiently worked up by the first clip, click the arrow on the right to see part two.

To start, we have no idea what is going on before this clip. What we do know is that a Lamborghini Aventador SV is parked in the street with a man wearing red pants standing by it. There is also a substantial line of cars stuck behind the parked Lamborghini. And we know that a guy with a backpack literally ran over the car. Finally, we know this Aventador has a suspiciously flimsy windshield.

In part two, we see Mr. Backpack come back for more… for some reason. This time, the man catches him and takes him down to the ground before telling him he is lucky to not be killed. Then, even though the poster’s description says he was “Knocked the F*** out,” Mr. Backpack instead appears to just play dead until the man gets in the Lamborghini and drives off.

This is what happens when two, um, difficult people interact. Mr. Backpack broke the cardinal rule of cars: Never mess with someone else’s car. Lambo man was committing a much less serious offense by wearing those silly red pants, but it still needs to be noted.

Blocking traffic won’t win you any friends, either.

Related: A Lamborghini Aventador owner has a strange reaction to being hit by a Taxi