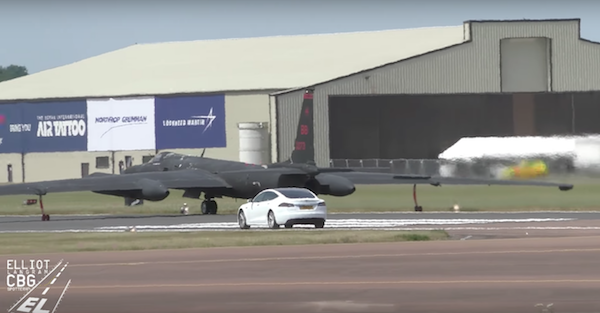 The Lockheed Martin U-2 spy plane has been used for decades, but its poor sight lines require a car to help guide it along the runway.

In the past, U-2 spy planes have used muscle cars such as the Ford Mustang or Chevy Camaro because they are both effective and inexpensive. But the Air Force opted to use a different kind of car to help the U-2 take off at Great Britain’s RAF Fairford airfield.

Instead of a muscle car like a Dodge Challenger Hellcat, they decided to use a Tesla Model S.

Related: The odd-looking B1 sports utility truck looks like a FJ40 and Tesla love child

Using the Tesla could have something to do with the lack of United States made muscle cars in the U.K., but the Tesla was undeniably effective in helping the plane.

It’s unlikely a Tesla is used for this mission that often—especially in the U.S.—but it is really cool to see it used for that purpose.