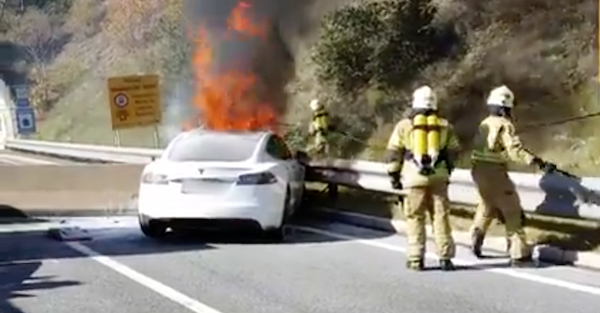 When Tesla’s catch fire in accidents, it’s an entirely different situation than when regular cars catch fire. Firefighters in Austria were recently presented with a situation where a Tesla Model S crashed into a concrete barrier before a construction zone.

The driver made it out fine, but the car burst into flames. Protocol for extinguishing a fire for an electric car is much different than in a standard car. Here they are extinguishing the flames.

Related: Fire engine video shows the ?line of sorrow? in the California wildfires

In a press release transcribed by MSN.com, here’s how they described the process of putting out the flames for the Tesla:

“The fire fighting – which could only be carried out under severe respiratory protection – was difficult because the vehicle was repeatedly on fire. It was only after cutting the power supply from the high-performance batteries that it was possible to finally fight the fire. Since lithium batteries are used, the manufacturer recommends that the vehicle be parked under ?quarantine? for 48 hours, so that no new fire can break out.”

The lithium batteries in Teslas contain “toxic vapors” according to the company, so those putting out the fire need to wear self contained breathing apparatuses.

The firefighters followed protocol and controlled the situation quickly, and it also speaks to the quality of the car how the driver was able to escape with only minor injuries.

After a crash and fire like that, the situation could have been much worse, but the firefighters handled the situation very well.