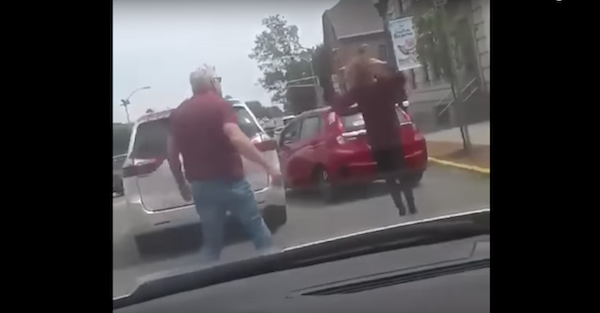 A road rage incident in Montclair, New Jersey resulted in a small dog being thrown from the car.

Related: This double road rage incident shows exactly what not to do

The incident was captured on dashcam by a witness, and it shows the driver of a Toyota Sienna minivan and the driver of a red Honda Fit. The two drivers were heated over something—it’s unclear what they were actually mad about—but their altercation spilled into the street on Bloomfield Avenue in Montclair.

The Honda driver then jumped into his car and took off. The dog was in the middle of the road, but it wasn’t injured after being thrown by the terrible person in the Honda.

The Honda driver had a Lyft sticker on the back of his car, and Lyft spokesman Alexandra LaManna said the Honda driver will never be able to use Lyft again.

“We are shocked and horrified by what we saw in this video,” LaManna said. “While this did not happen on the Lyft platform, we permanently deactivated the individual after learning of his truly cruel behavior; he will never again be able to use Lyft.”

Hopefully the man who threw the dog will face justice since his license plate was captured by the dashcam.