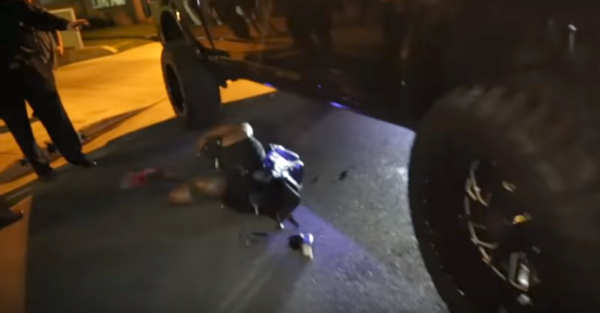 Days after Justin Bieber cancelled the remainder of his world tour due to “unforeseen circumstances,” the 23-year-old singer hit a paparazzo with his lifted Dodge Ram truck on Wednesday night.

Several reporters were swarming Bieber, and he took off in his truck and hit a man with his camera. Bieber got out of his truck and attended to the 57-year-old man, who was transferred to a local hospital with non life-threatening injuries.

“We arrived on scene and found a 57-year-old pedestrian on the ground,” Stout said. “He was transferred to local hospital with non life-threatening injuries. … Justin Bieber remained on scene, co-operated with officers and was released.”

Here’s another angle of the accident:

Hopefully the man is OK. It seemed like an accident based off of the video footage, though it’s hard to say definitively.

And for what it’s worth, Bieber later left the scene in an Aston Martin registered to Kourtney Kardashian. Just another day in the life of Justin Bieber.