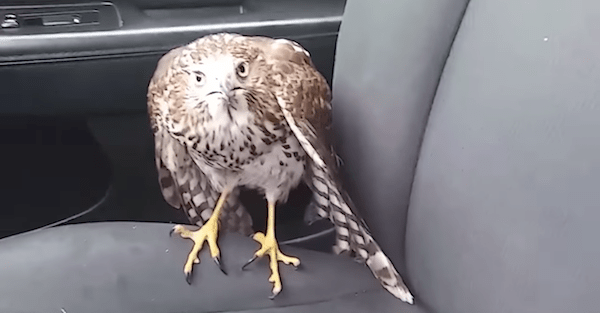 The flooding in Houston has reached disastrous levels, and many citizens have been forced to evacuate the city after Hurricane Harvey’s destruction. Even animals are trying to avoid the weather.

William Bruso is a cabbie in Houston, and he was surprised when a Cooper’s Hawk flew into his cab. And the hawk let it be known that he wasn’t planning on moving.

So, Bruso befriended the hawk, and he’s been chronicling their adventures together on YouTube.

Bruso named the hawk “Harvey,” and when he tried to set the hawk free, the bird was intent on staying.

Bruso eventually brought the hawk inside, where it made itself at home.

The TWRC Wildlife Center came to pick the hawk up, and they discovered he had an injury that was preventing him from flying.

The hawk wouldn’t have survived the storm with his injury, so thankfully Bruso was there to rescue and take care of him.

Hopefully the hawk heals and can fly again soon.