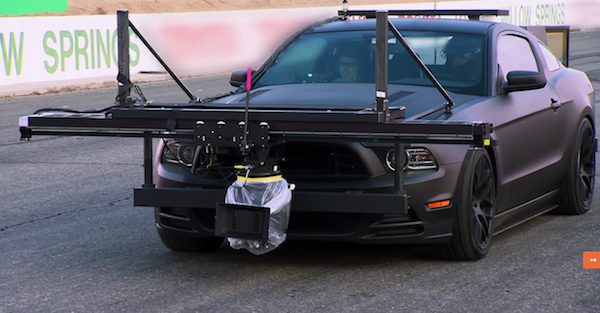 Whenever a movie car goes up for auction, it usually means some lucky collector is going to get snag their own movie star, some sort of flashy, loaded-out car that will probably never leave his/her garage. But this time a member of the crew is getting its time in the spotlight, although it’d be a mistake to think this car is anything less than an action star in its own right.

This year’s Barrett Jackson Scottsdale event is going to feature a camera car straight out of Need for Speed: a 2013 Mustang GT with only 7,780 miles. The car is slotted for Lot 1572. It’s unclear what price the camera car will fetch, but a similar car that was featured in the movie was auctioned for a cool $300k.

The car is, of course, fully equipped with camera mounts and spots accommodate your camera crew, in case you have one lying around. Because of all its added gear, the Mustang is being sold as camera equipment. That is, a piece of camera equipment with 14-inch  slotted brake rotors, 5.0-liter Coyote V-8 engine, six-speed transmission and a Saleen supercharger. Meaning it’s a little heftier than your average tripod.