A McLaren 720 crushes a motorcycle, and no one is happy 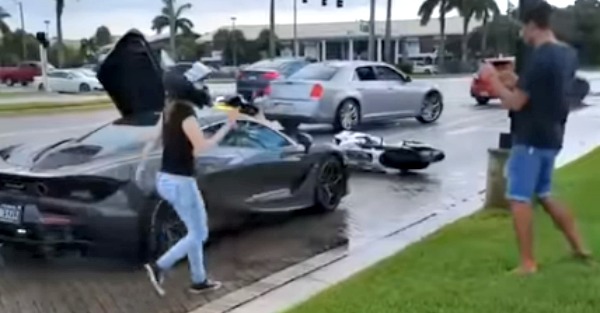 And everyone else, stop enabling Florida. You know it’s not ready for a Cars and Coffee.

Common sense aside, someone organized a Cars and Coffee in Palm Beach, where Mustang drivers ditch the pony car and get behind the wheel of a McLaren.

There must be some sort of chemical being sprayed on these events to make people unable to follow any traffic laws when they’re leaving. And while this video has no Mustangs careening into static objects like it’s normal, it does have a pair of bikers screaming at and hitting/kicking a supercar, or just your average South Florida intersection. Here’s the YouTube description:

The women was cut off by the motorcycles, the bikers blocked the car in and when the driver stepped out to talk to them she forgot to engage the parking brake causing the vehicle to roll into the bike in front. The bikers proceeded to damage the vehicle by punching and kicking it. One biker even swung at the driver which is why she got back into the vehicle left the scene and called the police from a safer location.

Related:  Two Florida men reached 130 on the highway before their race was ended forcefully