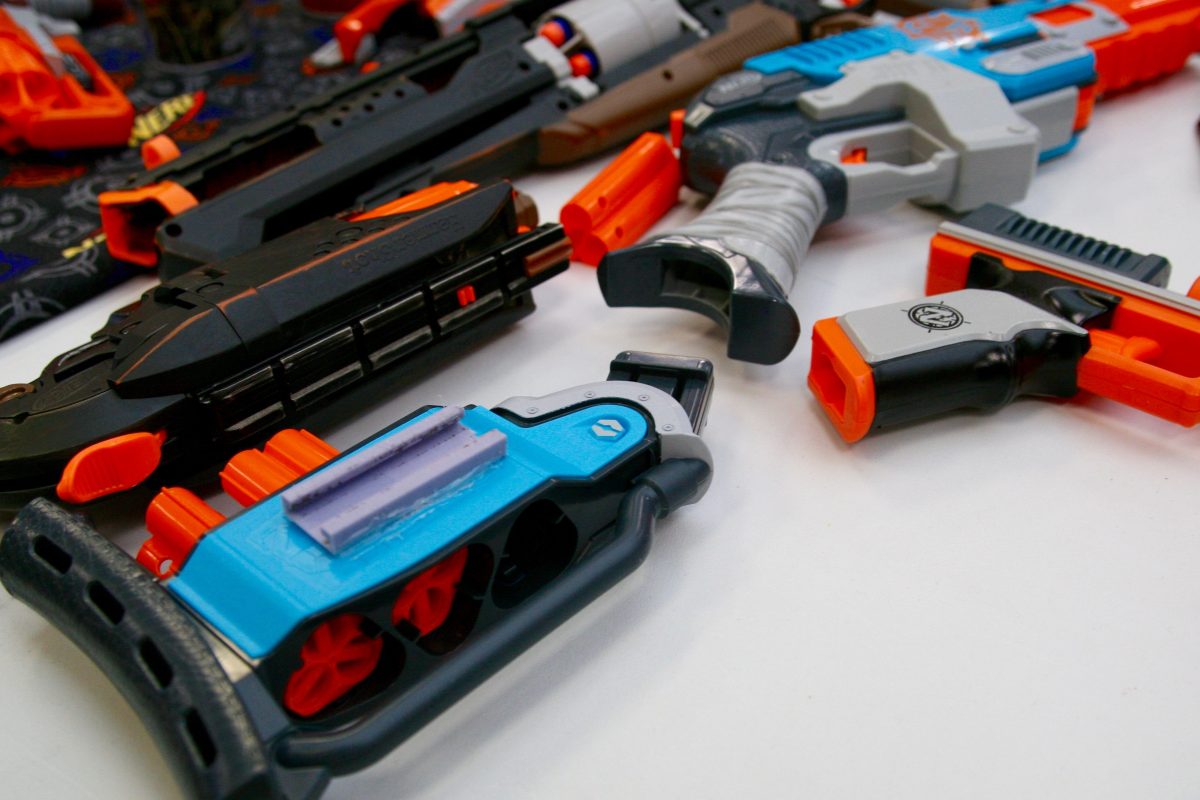 If you?re like us, you grew up during a period of unrelenting war and strife. On the battlefield, boys and girls became men and women. Men and women became monsters. We lost friends, made enemies. We survived. And, we were home in time for dinner.

Nerf guns were a blast as a kid, but as an adult, they?re even more naughty fun. With the wild nerf mods and DIYs out there, you?re now able to build war machines you could only imagine as a young recruit. Here are the most impressive nerf mods out there, along with some DIYs in case you?re feeling mischievous. You?ve probably nerfed before, but not like this.

What is Nerf Modding

The nerf modding community is booming, attracting attention from mainstream figures like Adam Savage and creating multimillion-dollar companies like PDK Films. But what exactly are nerf mods?

Nerf mods are mostly what they sound like: a wide variety of home modifications made to nerf guns. Nerf mods can be as simple as adding a more powerful spring or as complex as creating a new gun from the ground up via 3D printing. In this article, you?ll find some of the most impressive modifications on the internet, many of which include DIY tutorials.

If you?re looking for the most impressive nerf gun mod, it doesn?t get much more in-depth than 3D printing your own nerf gun. This $400 dollar nerf gun mod kit is high-powered and rapid-fire with features like an adjustable rate of fire, firepower, and shooting mode.

Warning: this gun shouldn?t be used on it?s highest rate of fire in competitive nerf wars — it leaves bruises.

This handheld minigun spotted by the SBNC youtube channel at a nerf war is certainly impressive. We don?t have much info on this monster of a blaster, but it appears to be a Nerf Stryfe or similar handgun with eight clips rigged to each side and a front-mounted handle. This means that with 18 shots per clip and 16 clips total, this nerf gun can fire 288 nerf darts continuously.

Read More: RC A-10 Warthog with a Nerf Blaster Cannon Is Your Childhood Dream Made Real

How to make Nerf Mods

Of course, once you see a few nerf mods, you?ll want one for yourself. But modders like to keep their best secrets to themselves, so nerf modding tutorials are surprisingly difficult to come by. Luckily, we’ve done the leg work for you: Here are several of the best DIY tutorials out there for making your own modded nerf gun.

Earth asked for an angel, and the universe sent Adam Savage. The eccentric builder you probably remember from Mythbusters is still somewhere out there coming up with many of the most interesting build designs around. If you?re looking for his content, he?s got an awesome YouTube channel called Tested, which airs an equally awesome segment called One Day Builds. One Day Builds, as you might have guessed, focuses on DIY projects that can be finished in a single day?s time and effort.

One of these builds focuses Adam?s own personal set of mods for the Nerf brand Longshot rifle. Adam adds a more powerful spring system, among other functional improvements, in addition to a really cool weathered paint job.

And, that isn?t the only nerf mod Adam has posted a tutorial for. He?s also posted this outstanding DIY which takes the 100-shot Rival Nerf gun and turns it into a 1000-shot Adam Savage build. He also adds a bipod and some nice aesthetic updates. Make sure you hang out for the T-Rex fire test at the end!

Nerf mod tutorials aren?t always easy to come by, but one nerf gun YouTube channel is trying to make it a bit easier with an extremely helpful DIY segment. These builds are all super easy for beginners, and the tutorials are quite in-depth. This is a great place to start if you?re looking to get into modding!

Another perfect beginner mod essentially requires removing a part called an air restrictor inside the spring plunger which limits the gun’s firepower. All you’ll need are a Philips head screwdriver and pair of pliers. Anyone can manage this build thanks to the effort of the impressive young lad behind mag212 youtube channel.

Sounds fun, right? Now, you have everything you need to get into nerf modding and start building your plan of attack for the wars to come. And don?t forget to share your all this new-found nerf modding knowledge with the rest of your unit on social media! There?s nothing worse in a firefight than a disorganized squad.

Good luck on the battlefield, soldier!

Read More: This Guy Built an RC A-10 with a Working Nerf Gatling Gun