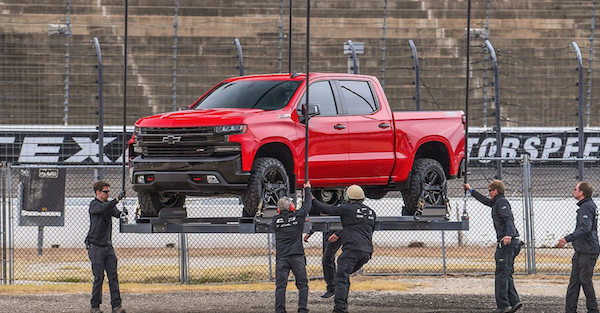 The 2019 Chevy Silverado is technically debuting next month in Detroit, but they gave consumers a sneak peak at the Chevy Truck Centennial at Texas Motor Speedway.

The new truck was brought in via helicopter, and while the details on the truck haven’t all been revealed, the truck looks sleek and modern.

Some early clues to the materials on GM's next-gen Chevy Silverado https://t.co/5GPxbLhuMp pic.twitter.com/tKSFFBKG3E

Related: Chevy won?t sell you a Duramax Diesel Suburban, but where there?s a will there?s a way

Chevy did reveal that truck will have a factory two-inch suspension lift. Take a look at what Chevy is calling the “next century of Chevy trucks.”

AutomobileMag.com reported that the new Silverado will have more transmission and engine options.

“In keeping up with the ultra-competitive segment, Chevy looks to offer more engine and transmission options than recent generations, likely including the new 10-speed automatic that can be found in the 2018 Tahoe and Suburban, alongside the existing 6.2-liter L86 V-8, currently putting down 420 hp and 460 lb-ft of torque. Expect a range of diesels and lower output powertrains as well.”

We’ll be able to learn more details about the Silverado in the coming weeks, but the early look at the new truck is very promising.