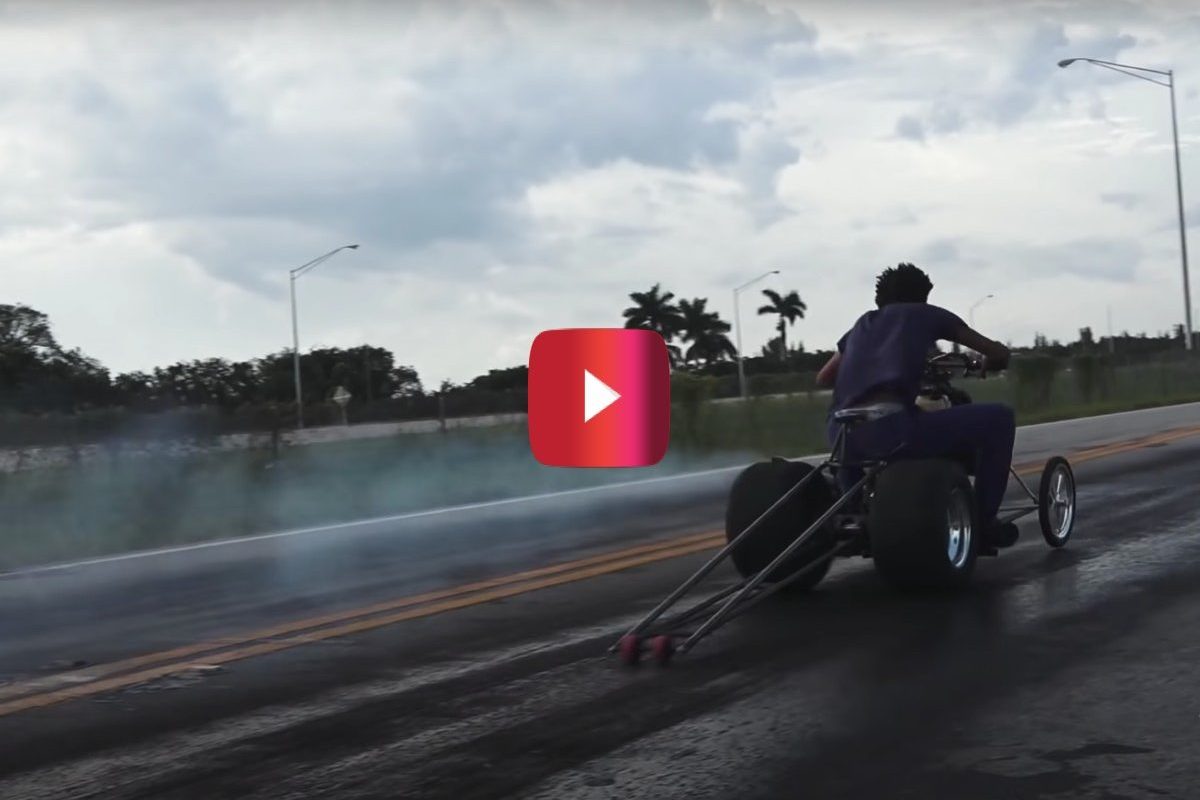 It’s pretty hard to deny that Yamaha has made some awesome ATV quads over the years. You have options of lower-priced models like the Yamaha Blaster, or, if you want something with lots of power, you’ve got the Yamaha Raptor 660 or Raptor 700. However, some people prefer two strokes, and that’s where the Yamaha Banshee comes in.

Banshees are known for being lightweight and quick already, but Proven Performance wanted to show what his fully decked-out quad was capable of doing in the eighth mile. The YouTubers from That Racing Channel captured the action as the racers took the drag Banshee to the streets for some test hits.

Take a look at the video, and see just how much work was put into this machine. It was stripped down to the frame and outfitted with tons of go-fast parts. Everything from the handle bars to the wheelie bar was customized for a racing application. It has skinny bicycle tires in the front, with junior dragster drag slicks on the back. The built drivetrain is topped off with some big carbs and a custom clutch system, which plays a vital role in putting the power down, according to the owner.

The Banshee YFZ350 is one of the most iconic Yamaha ATVs to have ever been created. In the world of powersports, these machines are very well-known. That’s because people use them for a wide variety of applications, however, they mainly are used for some type of racing because of their power.

The OEM engine used is a 350cc twin-cylinder design, paired with some Mikuni carburetors and a six-speed transmission with a wet clutch. Of course, being a two-stroke, you’re going to get that ridiculously high-performance, top-end power. In the lower rev range, power delivery is quite sluggish. It utilizes a premix lubrication system, as well as a wet-type air filter. From the factory, the Banshee produced 35 horsepower and nearly 40 ft-lb of torque. The capacitor discharge ignition (CDI) requires both a battery and a manual kickstart.

These Banshees were produced for the United States from 1987 to 2006, but they’ve hung around for quite a while now. Even today, you’ll see tons of people with them, and they often take a great satisfaction to owning the vintage quad. With its big bug eye headlights and ridged fenders, a Banshee is hard to miss.

The real fun with these quads begins when you look into the aftermarket parts. Changing out some simple parts like the sprockets, exhaust silencers, or carbs can increase your power drastically. You’ll find enough aftermarket support on these to take down just about any dirt bike or ATV you come across. Some people equip the Banshee with sand paddle tires, dirt tires, street tires, or whatever makes the most sense for its intended usage. They’re capable of customizations that fit just about any type of motorsports.

Depending on your area, finding one might be a challenge if you’re looking to purchase. Most of the time, people don’t want to get rid of theirs. If you happen to find one at a good price, it’s worth picking up. Once you smell that premix burning and feel that two-stroke powerband, it’ll all be worth it.