Everybody who's ever sat in the driver's seat of a car knows that the only way to get it to make that really cool "vroom vroom" noise is by revving the engine.

It's really the ultimate power flex. Some vrooms are deep and throaty, while others have that high, whiny sound that means a tightly-tuned machine is present.

If it weren't for engine revs, how would we know what the guy next to us has under the hood?

It turns out that we all might want to tune it down with the vroom vrooms, at least for the sake of our engines. Now, there are certainly situations where engine revving is perfectly acceptable, such as at the track, but for your average car owner heading to work in their Toyota sedan, it might not be the best idea.

What Happens to Your Car's Engine While You're Revving?

To be abundantly clear, we're referring to "engine revving" as the act in which you stomp on the gas while in park or neutral. The car goes nowhere, but the RPMs climb, and the engine clearly exerts itself over a short period of time.

Historically, there were reasons to do this. Anyone else remember getting up two hours early on cold days and idling the car for at least one of those hours so that the car's cold engine was warm enough to get you to work? Revving the engine was considered a "life hack" back then, though they were known as "Helpful Hints from Heloise" at the time. Unless you have an old-school carburetor, you really don't need to do this warm-up method. Ever. Technology has changed.

Now, the theory behind this is very correct. If you rev your engine, the engine oil will circulate very rapidly, and the temperature in the engine will increase dramatically. But, in today's modern vehicles, that's not necessarily a good thing.

Stress Can Cause Damage

When you stomp on that gas pedal and hit the redline, your engine goes from hanging out to super-high RPM. Imagine you're fast asleep, full in the nap zone, when suddenly, someone throws back the blankets, funnels a triple shot of espresso down your throat, slaps you on the bottom, and makes you do 100 jumping jacks, lickety-split.

If you survive the attack, you will likely be very grumpy about it. Your muscles will be sore, your body will be in a state of shock, and you might feel the need to slap whoever is responsible.

If your car had a central nervous system and advanced emotional responses, it would feel the same way. 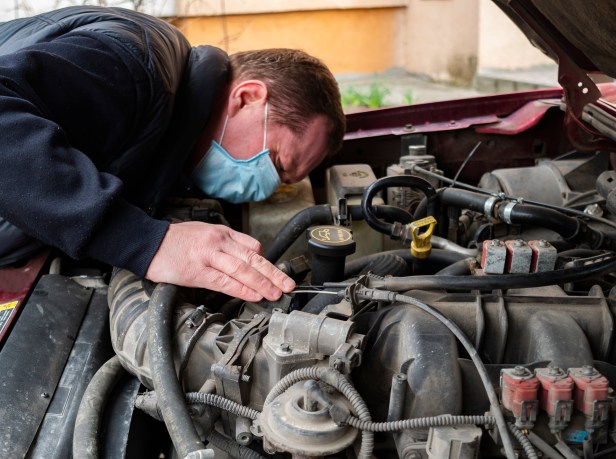 The Parts of Your Car That Hate Revving

There are a few spots in particular where engine revving can create very specific automotive problems with the small moving parts that support your engine. The clutch and the flywheel, for example, get really irritated with over revving, because it throws a bunch of heat and tension to some pretty finely-tuned parts.

The valve train is another such spot. If you rev your engine too much, you can get what's known as a valve float, in which the valve stays open all the time, instead of opening and closing as it should to properly adjust airflow. This can cause the engine to misfire and lose power. While fixing a valve float is as simple as replacing all the springs in your valve train, you may not notice or diagnose the problem for awhile, which can lead to more extensive damage.

For example, you could throw a connecting rod. This is the extremely vital piece that connects the piston to the crankshaft. If you throw a connecting rod, you can basically kiss your engine goodbye. This is one way to head directly to engine failure and costly repairs, if not complete replacement of the entire vehicle.

While not all engine revving is going to cause irrevocable damage, it's a good idea not to overdo it. You can get around engine damage with a rev limiter, unless you have a manual transmission, but really, maybe the rev limiter should come from within.

Maybe your car doesn't need to go "vroom vroom" unnecessarily. At the track? Of course. Do the burnout. When you want to make sure everything sounds good after some repairs? Rev away, friend. But every morning, or worse...every stop light when some punk pulls up next to you in a Honda that's a little faster and tad more furious than they're prepared to handle? Nah. Don't get into that bad habit. Skip the rev and let the punk throw their connecting rod instead. You'll save yourself the hassle of any unnecessary engine wear and tear, and your car will thank you.