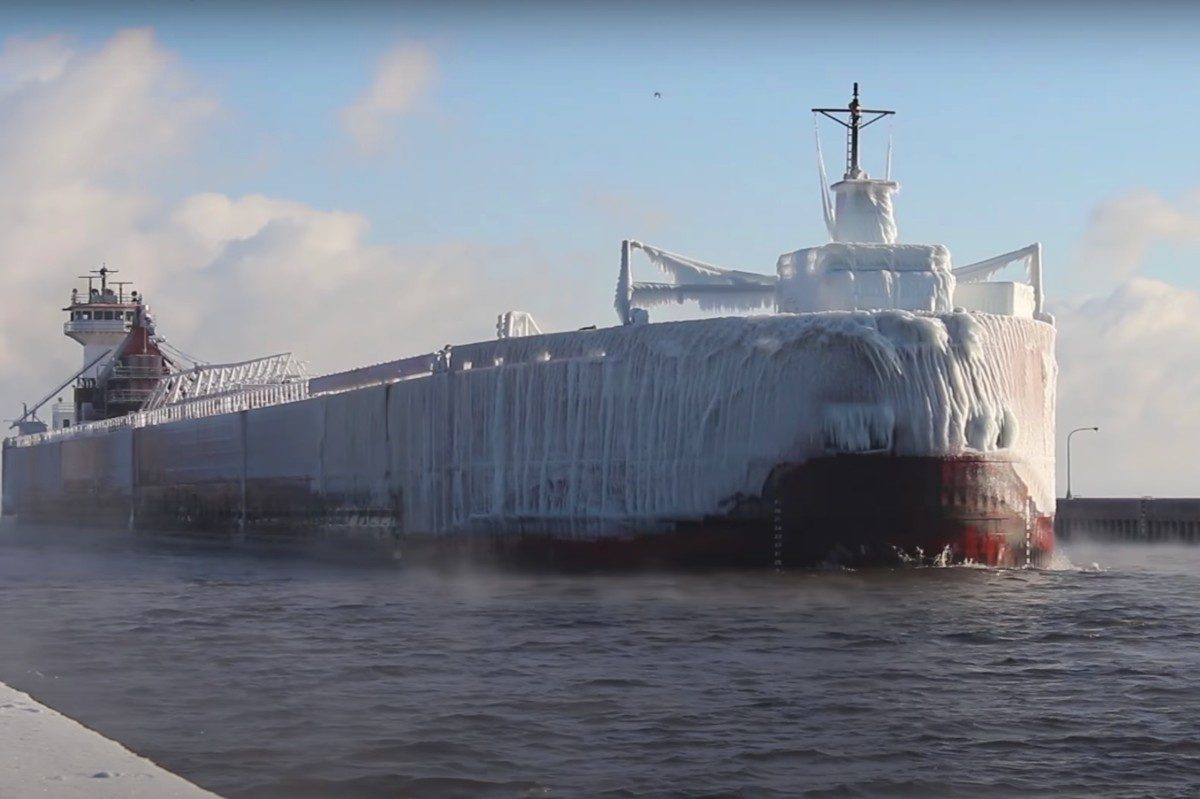 The Duluth Canal is located way out west on Lake Superior, and it’s not all that uncommon for ships to show up covered in icy lake waters in the winter time. But, back in December 2016, someone took video of an ice-coated tug boat/barge combination pulling into the Minnesota canal, and let’s just say, this thing was so eerie-looking that it seemed like it was a legitimate ghost ship.

This incredibly massive ship from the video is the Great Lakes Trader, and if you watch as it pulls into the Duluth Canal, it’ll straight-up send shivers down your spine. According to the Duluth News Tribune‘s report of the spooky occurrence on December 13, 2016, the weather around the canal was much lower than normal, hence the ship looking like a ridiculously fast-moving iceberg.

Below-zero temperatures and westerly winds led to freezing spray on Lake Superior and left the vessel coated in ice as it passed through the Duluth ship canal, with a group of onlookers on hand in the frigid conditions. It had warmed up to about zero in Canal Park by the time the ship arrived at about 10:20 a.m., after subzero temperatures to start the day.

Morning lows Tuesday in the Northland were in the single digits and teens below zero, including 6 below at the Duluth harbor, 7 below in Superior, 11 below at the Duluth airport, 14 below at Hibbing and International Falls, 16 below at Cotton and 17 below at Togo and Embarrass, according to the National Weather Service. Wind chills dropped to 30 below zero in parts of the region.

While far from a record, Tuesday?s temperatures were 15-20 degrees below normal. The average high in Duluth at this time of year is 23 degrees; the average low is 8 above zero.

Sure, this freighter isn’t an actual ghost ship, but it certainly looks like one thanks to the utter silence and icy make-up of the entire thing as it moves like, well, a ghost.

As you can imagine, the Great Lakes Trader dominates any shipyard it pulls into. It was built for Great Lakes Marine Leasing and is operated by Van Enkevort Tug and Barge, which is out of Escanaba, Michigan. This monstrous vessel is pushed by the 135-foot tug Joyce L. Van Enkevort, which was built in 1998 by Bay Shipbuilding Co in Sturgeon Bay, Wisconsin. Of course, the tug is an absolute beast as well and is powered by two 5,100 b.h.p. Caterpillar 3612 12-cylinder diesel engines.