Ah, the scent of burnt rubber. It's a great smell when you're smoking the tires, but not so much when you're cruising along casually during the daily commute.

If, for some reason, you begin to notice a burning rubber smell inside your vehicle while driving, it may indicate a serious problem. Figuring it out sooner rather than later would be the most ideal way to avoid any type of dangerous situation.

There are a number of possible reasons behind why your car smells like burning rubber, but to help narrow things down, we'll briefly break down six of the most common causes. 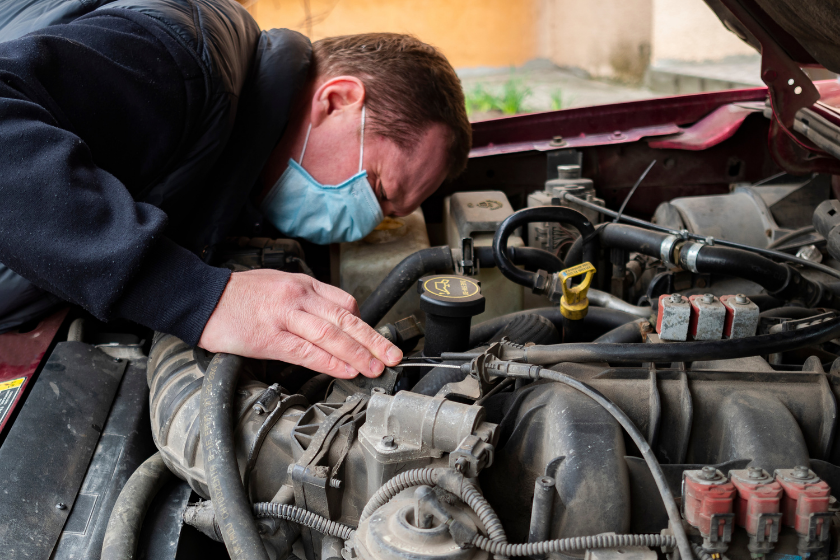 Burning wires have a pretty bad smell to them. Many times, this scent can travel through the air conditioning vents and into the cabin. If you notice a burnt rubber smell for only a moment before it disappears, there's a good chance that a fuse has burned out. Inspect the fuse box to check the electrical system condition.

More severely, a wire could be actively shorting out, so check around the engine bay, and make sure you don't see any smoke.

An oil leak is important to address. As the oil escapes and lands on the hot engine components, it will burn off, releasing a smell that can resemble burnt rubber. Gasket failure is typically why engines develop oil leaks.

If this car maintenance is overlooked, you'll end up being low on engine oil, which can cause overheating and lead to a blown head gasket or cracked engine block. Fix that oil leakage early to avoid more expensive problems down the road.

In order to power many of their components, such as the AC compressor, power steering, and alternator, cars have a rubber drive belt that rotates around different pulleys. If the belt is worn, or if any of the pulleys are not functioning properly, this will cause the belt to slip.

This slippage will result in a burning rubber smell. Typically, if the belt is slipping, you'll hear a squealing noise. If left untouched, the belt will eventually break, leaving your car stranded.

Car engines have tons of rubber hoses to run fluid or air through their systems. These components have a lifespan and will eventually need replacing. On the chance that you have a worn, loose, or melted hose, you may catch the scent of rubber burning due to the hose's proximity to the hot engine.

If one of the hoses fails, there will be other dead giveaway signs. These include a puddle of fluid on the ground, smoke rising from the engine bay, or a loss of pressure.

The cooling system is among one of the systems that uses hoses. A coolant leak can appear in a few different places, but coolant typically leaks from these hoses. Once coolant hits the engine, it'll burn off. It'll put off a strange smell, which can be mistaken for a rubber burning scent.

Do keep in mind that coolant is a flammable liquid. Too much of it landing on the exhaust system poses a massive fire risk. The radiator will also be low on fluid, inevitably causing overheating.

Object in the Engine Bay

There's a chance that you may have picked up a foreign object while driving, or if you were recently in the engine compartment, you may have forgotten an item under the hood. This particular cause of a burning rubber smell isn't extremely common, but it can happen.

Check around the engine compartment for anything that looks like it shouldn't be there. This would include tools, a plastic bag, or any other debris that found its way in.

READ MORE: Get Rid of Pesky Odors and Improve Your Car's Air Quality With These Cabin Air Filters