Watch one oblivious driver set off a chain reaction of carnage 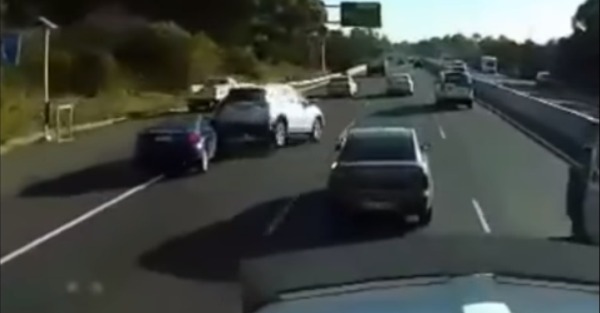 What the heck was that Toyota Celica doing? Traffic seems to be moving pretty smoothly even though all of these cars are bunched a little tight. But here comes Mr. Celica, closing fast on the slower traffic totally oblivious to the SUV it is about to hit until the last minute.

It then makes matters worse by swerving last minute. The contact to the left rear of the SUV sent it flipping down the highway where we see it collect at least three other vehicles including the semi with the dashcam.

And in case that wasn’t enough, the Celica also plowed into a truck parked on the shoulder. The Daily Mail reports that two people were sent to the hospital with minor injuries and a total of seven cars were ultimately involved.

Luckily the driver who kicked off the whole chain of carnage is ok, so he can be sued by each and every one of the victims of his stupidity.