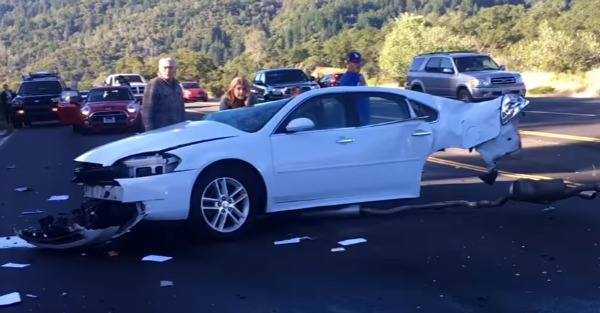 There is a close call and then there’s this. A crash scene was recorded by a man who stated: “The craziest thing I?ve ever seen, and I?ve seen many accidents.” Now, this type of phrase gets used often, but when it comes from a former Air Force ambulance driver you can rest assured that something really bad happened.

The accident happened on a California highway when a large Toyota Sequoia SUV drifted off into on coming traffic and head-on into an Impala.  Head-on collisions are usually major but when both cars are traveling at highway speeds, tragedy is unavoidable.

In this case, the larger SUV literally tore the Impala in half leaving one half on the highway and the other on a nearby hillside.  Miraculously, the drivers only suffered minor injuries.  Even crazier was the driver of the Impala was just sitting in her seat, car ripping in half talking to people trying to help. She came inches away from being struck by the Toyota.
The Sequoia was also heavily damaged and the driver was tossed from the vehicle during the wreck.  He is seen talking to others in the video and was eventually brought in by ambulance with more serious, but not life threatening injuries.
According to the Santa Rosa Press Democrat, drugs may have been in play here.
Whatever the case, watching this video will quickly remind you of what is really important in life.
Related: If your car is over 15 years old, you might want to take a look at this