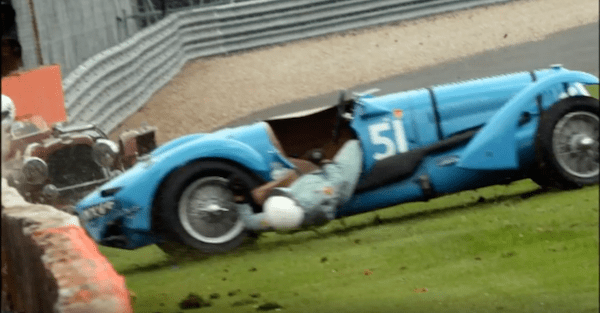 Richard Pilkington was competing in the Silverstone Classic in the United Kingdom when his car had a devastating crash at 100 mph.

Pilkington was hanging from the side of his car after the crash, and he somehow kept himself from hitting the ground.

The crash occurred after Pilkington collided with another car coming around a corner, and his car kept going across the track while he was hanging outside of the car. The crash involved a Bugatti and an Aston Martin.

There is no video of the accident, but photographer Ben Lack was able to capture a few images of the crash as it was happening.

Related: Man buys new Honda Civic Type R only to have a car crash into him hours later

Pilkington was able to avoid serious injuries by how he positioned himself while hanging outside of the car. He curled his body away from the ground and just barely avoided a devastating injury.

No drivers in the crash were seriously hurt. Pilkington hit his head on the barriers around the track, but his helmet prevented any injuries.

An eye witness said Pilkington stood up “dazed,” but he nor any other drivers suffered any broken bones.

After looking at the images from the crash, it’s incredible that no one was seriously hurt.