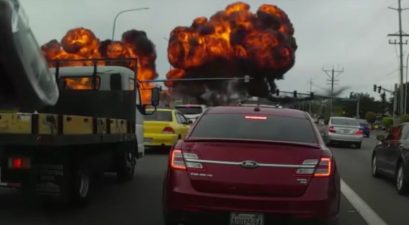 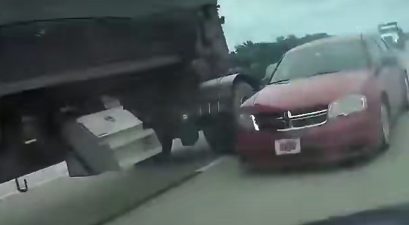 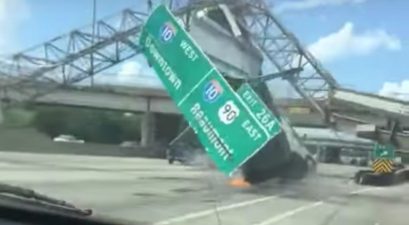 Hitting a deer with your car can be dangerous at any speed, but doing so at 114 MPH is downright terrifying, as one Minnesota sheriff’s deputy found out.

Back in late October 2017, Isanti County Sheriff Chris Caulk says one of his deputies was responding to a report of a man with a gun and was traveling about 114 MPH with his lights and sirens on, according to Twin Cities Pioneer Press. That’s when disaster struck. Or, more specifically, that’s when the aforementioned deputy struck a deer with his cruiser.

The above dashcam video showing the incident is fairly grainy, but judging from the immediate aftermath of the crash, you don’t need HD footage to tell that this accident was pretty damn intense.

Read More: Here’s What You Should Do to Avoid Hitting a Deer on the Road

After the footage of the crash was released, Sheriff Caulk ended up commending his deputy for not swerving to avoid the deer and hitting it head-on, as it reduced the risk of injury.

“If the deputy swerved, he would have rolled and been injured or worse,” Caulk said. “Staying in a straight line kept the injuries to a minimum when the air bags deployed.”

When it was all said and done, the car sustained damage to the bumper guard on the front end, the windshield was smashed, the hood was nearly ripped off, and the engine was smoking. Fortunately, it appeared the deputy was able to walk away unharmed. The deer wasn’t so fortunate, as indicated by the deputy’s bodycam.

Considering that a deer’s life was lost, this was certainly a sad incident. But, when you take into account the high speeds sheriff’s deputy was traveling at, it’s clear that things could’ve gone much, much worse. And, thankfully, they didn’t.