Is this idiot ‘skateboarding’ his CRX into a ditch for real? 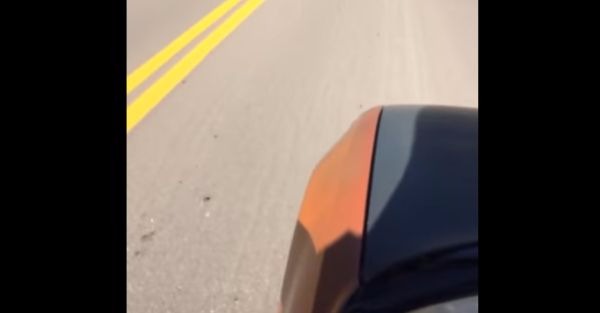 The Honda CRX has a sad history. Nothing was wrong with the fun, efficient Civic-based go kart itself, but its owners were often a different story. Because they were cheap, light and shared parts with nearly every Civic throughout the 80s and 90s, CRX’s were often owned by the kind of person who would immediately ruin it. The kind that could crash and immediately exclaim: “Guys, my Busch Light is gone!”

Ok, something fishy is going on here. Besides the vertical filming, we mean. We can’t quite put our fingers on why, but it doesn’t feel right, does it?

Reddit agrees and has been dissecting the video to try and prove it is fake. None of their arguments are very conclusive, so the best we have is that the person pops up way too fast and is way too collected after being “thrown” from a wreck of that severity.

There are some after (Before?) pictures of the car posted without comment here on Imgur. The damage looks decidedly real for how questionable the video is, with the seat hanging out of the car the most concerning of the details, but it is totally possible this car was part of a real wreck before the video was made.

If it is fake, the poster (who suspiciously has NO other videos on his channel) is a much better editor than he is an actor. If it is real, this idiot has to be related to Bruce Willis’ character in Unbreakable.

Related: Another Jeep-justice video makes it clear who the real jerks are