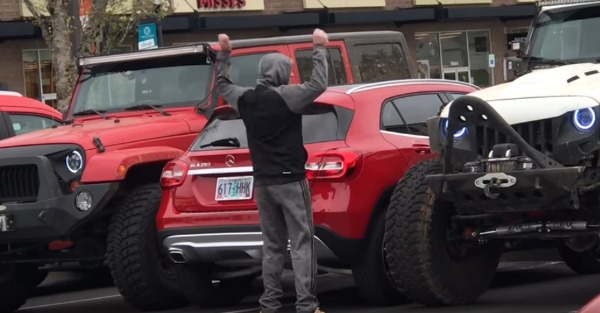 Another video of parking lot justice dispensed by Jeeps! These guys saw this Mercedes owner parked directly between two spaces and decided to get a little revenge by boxing them in with their lifted Wranglers. When the Mercedes owner comes out, he has no choice but to climb into the car through the tailgate. But wait, that white Jeep on the right looks familiar.

Oh, come on! That is the same guy who tried to convince us he was, again, dispensing parking lot justice to a BMW driver. That one looked very staged and this one also looks like a possible set up. It would definitely explain the goofy histrionics of the Mercedes owner if this was staged. It was a little too convenient that he kicked the tires of each Jeep, guaranteeing he did nothing to hurt the cars that were supposed to have spontaneously blocked him in.

If this happened in real life, it would be easy to argue for both sides being the bigger jerks, but since it is most likely staged, there are no sides. Only us being tricked into giving them another view. Dang.

Related: This Jeep wants you to think it dispensed some parking lot justice