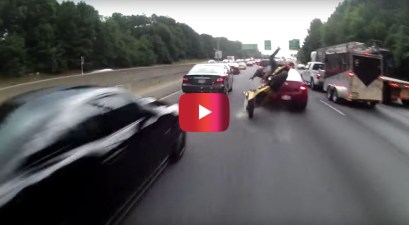 Well, this is one way to ruin a morning commute.

In the above amateur footage, we get a look at what happens when an incidental rear-ending on a Virginia Beach highway almost ends in complete catastrophe. Suffice to say, it did not look like a fun time for anyone involved.

As the video shows, a Nissan Altima somehow manages to get wedged directly under an RV, while the Dodge Ram pickup that was towing the RV is just hanging out on its front wheels. Definitely not the position you want to see a Ram in.

Here’s how the terrifying incident went down, according to one of the witnesses.

“The car hit the truck pulling an RV trailer from behind. It drove under it all the way to under the truck’s back axle. No one was hurt. My son, who’s in the Navy and is a Seabee stopped right away to see if help was needed. The lady was still stuck inside. I believe she crawled in the back seat and got out the opposite side back door. No one was injured.”

Now, according to WAVY, the whole thing was set into motion after the travel trailer’s brakes locked up, leaving the RV, the Ram, and its four occupants stranded in the middle of the road.

That’s when the Ultima came driving by. The driver attempted to avoid the traffic jam caused by stranded RV by merging right, though somehow, she ended up rear-ending the RV and getting trapped right underneath it. Talk about some pretty terrible luck.

Considering that series of unfortunate events, it’s a miracle no one was hurt.