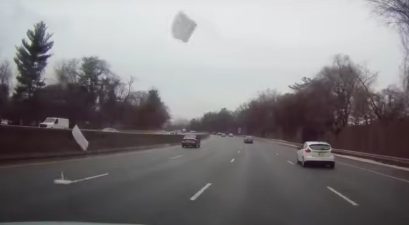 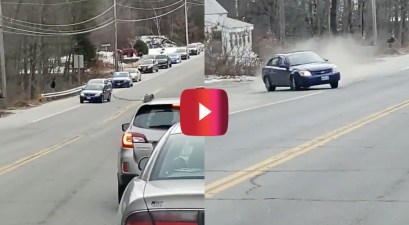 Well, this is not the ideal thing to happen when you’re trying to go on a nice getaway in your RV. This guy is just cruising along the highway in Waco, Texas, when the door to his RV suddenly swings open, breaks off, and slams right into the vehicle driving beside it while traveling around 70 MPH.

The incident was luckily captured on the dashcam of the vehicle that was trailing the RV. This driver also had to swerve to avoid debris and glass from the door. At the time of submitting the video, the witness claimed that the vehicle that was hit started to slow down, however, the RV continued down the road. Eventually, the damaged vehicle sped back up and pulled in front of the RV driver and motioned to pull off to the side of the road.

This is why it’s always important to pay attention out on the highway. Incidents like this can happen in the blink of an eye, so always be aware of what’s going on in front of you. Speaking of safe driving, this guy probably should have given his RV a little pre-trip inspection before heading out. It was more than likely an avoidable situation, if he could have caught the issue earlier.

That being said, situations like these will happen from time to time, even if you’re the best driver out there. That’s the reason we all have insurance. What good is it if we don’t use it every now and then? Fortunately, no other accidents were caused by the flying door, and the two involved were able to exchange information a little later down the road. This is the kind of time where it really pays off to have a dashcam, so I’m glad this driver had one to capture this wild moment.