Legal or not, this driver did so much wrong in so little time 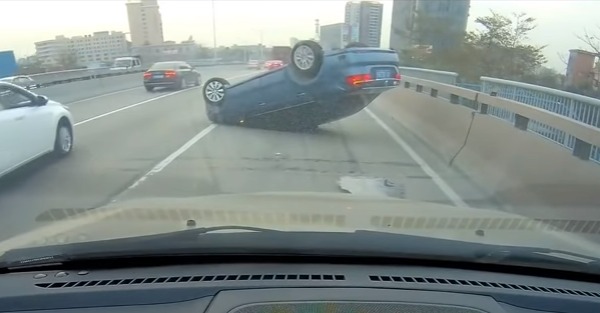 This is a great example of when determining which party is legally at-fault doesn’t tell the whole story. A certain legal vs moral argument comes into play.

Legally, the blue VW is totally at fault here. Assuming Chinese laws are even remotely similar to ours in the U.S., the VW illegally crossed two solid white lines. Even if that wasn’t the case, it is the responsibility of the driver making a lane change to determine if it is safe to do so. On two counts already, this VW is legally at fault.

And that is why legality only tells half the story. Sure the VW was breaking the law and also had a pretty aggressive case of idiot-itus, but the car with the dashcam did about everything in its power to assist in this wreck. First, legal or not, the blue car clearly had position and was signalling to get into that lane. The camera car accelerates hard enough to close that gap and then matches speed to box out the VW.

If drivers could have relaxed at this point, they both would have been on to their destination with a story about some jerk on the highway. Instead, both drivers crank the aggression up to maximum. The Blue car decides it is coming over regardless of the consequences, and the cammer decides, wreck or not, he will never cede his position. The result is a hard hit and a rollover.

While the driver of the camera car is sure to be indignant, they had every opportunity to avoid this accident and the danger it posed to everyone on the road. Sometimes you just have to be the better person.

Thank god there wasn’t a scooter there at that exact moment.