This idiot came within inches of killing a broken down motorist 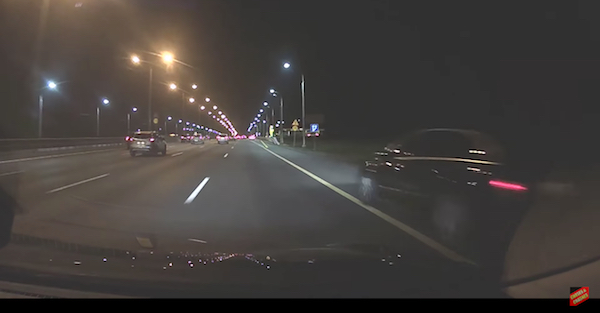 It feels like there’s a constant stream of videos showing people narrowly avoiding death at the hands of some unobservant pillock behind the wheel of a car – there are certainly an equal number of videos where people actually die, but not everyone wants to go down that rabbit hole.

Some of these scenes can be explained away as accidents – a deer runs into the road, someone slams on the brakes, sending a series of events spiraling into motion, which no one could have foreseen. This just isn’t one of those cases.

The unnamed driver speeding by from the right of the screen is clearly driving way too fast and is no where near the fast lane. It’s not possible to unintentionally drive like this. After passing the car filming on the right, the driver of the black SUV quickly swerves to avoid hitting a car in front of him, and subsequently rear ends another driver on the road. But look closely at the 13-second mark. Notice anything terrifying? That’s right, there’s someone standing on the road.

Whoever the person on the road is, he/she has some incredible luck. Seriously, that’s a one-in-a-million shot for not dying.

Related: A Lamborghini split in half and caught fire in a scary crash in Miami