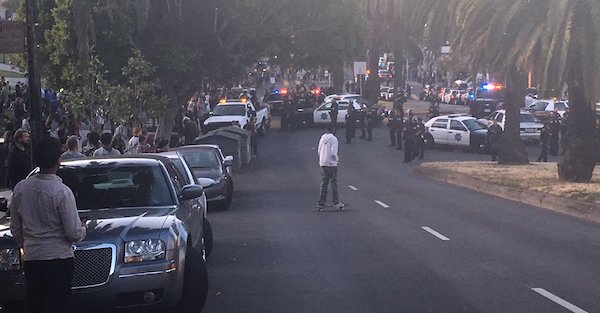 It’s a war as old as time: Cops vs. skaters. Anyone who’s ever gone through the meat grinder that is learning to skateboard will tell you, cops are kind of a pain. Just to head off all the blue defenders, no, not cops are not all bad; it’s just that sometimes groups of people are possessed by a predisposition to dislike one another, which explains the po-po/skater divide.

The latest major battle took place in San Francisco’s Mission on Dolores Park. To bring all the uninitiated up to speed, SF has a rich history with skaters. Mostly, it involves riding a plank of wood down dangerously steep hills really, really fast. It’s both terrifyingly awesome and incredibly stupid all at once.

The cops, possessed by their innate need to kill all buzzes and protect public safety, showed up to stop people from hurtling down a hill like demented cannon balls. Their intentions were possibly noble, but the tactics of at least two of our boys in blue were a tad flawed. How? One parked a car at the base, while the other decided to push a skater into it. What could go wrong?

Both the skater and officer were taken to the hospital, but it doesn’t take too many views to see who ended up getting the worse end of the scenario.

Related: This Skater refuse to tour LA in a Mini, because his own car is much cooler