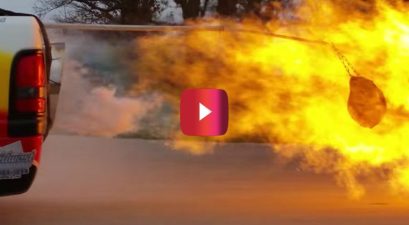 It’s not often that you see “speed trap” and “hilarious” in the same sentence. But, on a highway over in the United Arab Emirates, there’s a speed trap that’s so outside of the box, it’s impossible to not at least have a chuckle over it.

The police officers over in the UAE are either super lazy, have a great sense of humor, or both. This cutout of a cop car on the highway, complete with randomly flashing lights, does a perfect job of making drivers hit the brakes and be on their best behavior. At the very least, we know it got one driver’s attention.

“It was shocking moment for me,” reads the video’s description. “I thought it was a real police car so immediately I fastened my belt and lowered my speed. When I turned around, it was a joke for me.”

Initially, you’d have to imagine that this makeshift speed trap would be pretty effective. Until you get up close, you can barely tell that you’re looking at a cardboard cutout of a police cruiser. But, after a couple days, you know that most of the folks in the area would have wizened up to the trick pretty quickly. Ultimately, this cutout was probably more effective as a way to pick out the tourists and out-of-towners from the locals.

For the sake of longevity, the next move for this creative speed trap is probably parking a real cop behind that cutout. That’d way, UAE law enforcement would be able to snag all the drivers who have been lulled into a false sense of security by seeing this faux-cop on their commute every morning. Then again, as someone who has been pulled over for speeding a few times, maybe that’s almost TOO good of an idea.