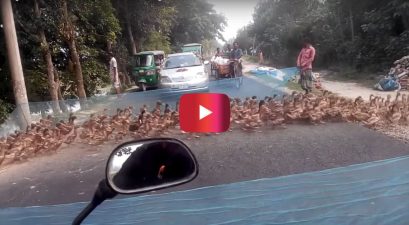 I’ve got to admit, I did not see that one coming. At the beginning, I thought the driver was making some kind of oil catch can, or maybe even a bowl to hold all the bolts and screws he was going to remove. It turned out he was making something much more useful, and I’m actually quite impressed with the ingenuity.

As he showcases his creation, it turns out he just mounted a metal tub to his engine bay in order to cook food with his engine. I mean, you have to admit that it’s kind of cool. Who needs a grill when you have this? The car owner films himself cooking up some chicken while overlooking a scenic view across the water. That looks like a pretty interesting way to spend your evening, and I’m extremely curious to see how well that was actually cooked at the end.

Leave it to a car guy to find some kind of way to get more use out of their vehicle. Now, you can spend even more time gawking at the mechanical components in your engine bay. Hell, if you own a Subaru, it could probably even double as a smoker, as well. Automakers need to step their game up, because this should be an option on all the new vehicles that are coming out.

I do envy this guy’s spare time and ability to come up with such a wacky idea. Just imagine going out and taking your car for a nice long drive through some curvy roads to really have some fun and get the blood pumping. Once you decide it’s time to take a break, you simply park somewhere nice, pop open the hood, and BAM! There’s your nice hot dinner waiting on you while you let your car cool off. I’m convinced this dude’s living in 2050!