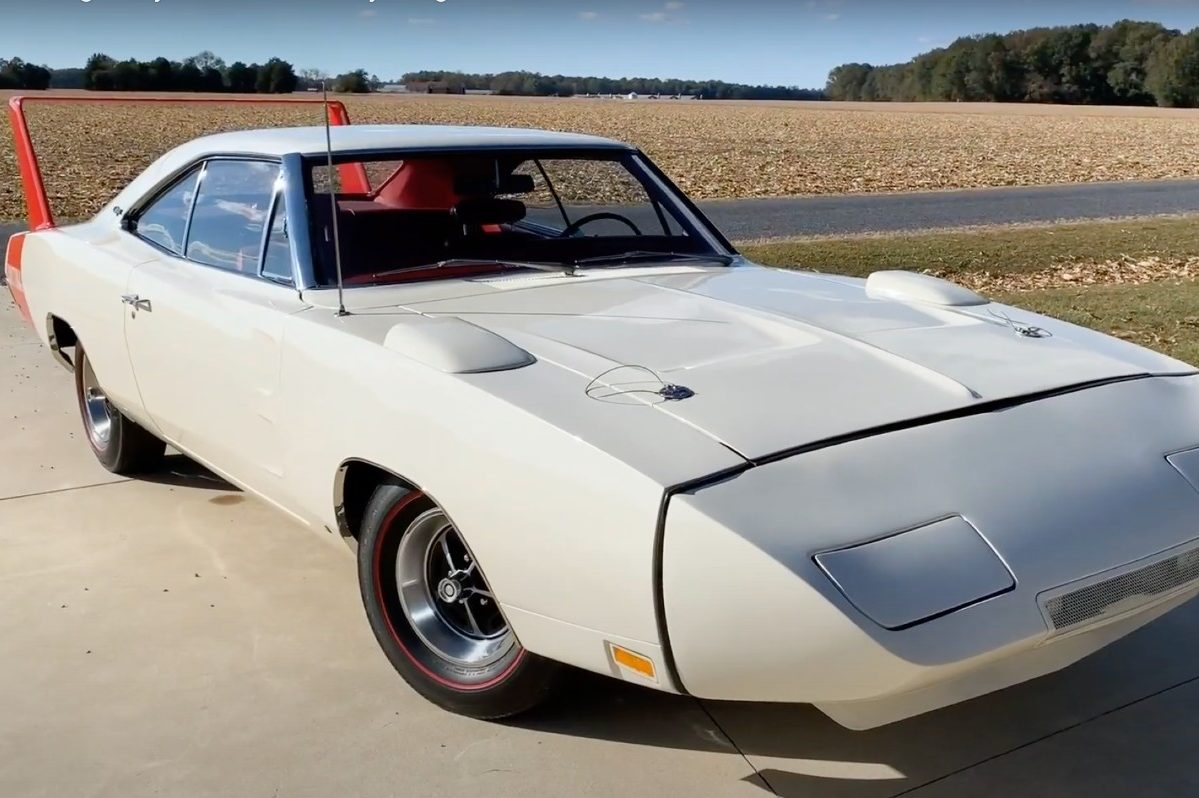 One of the things we love about restomod shows is watching a “nothing” become a “something.” The experts take some beat-up junker from the back lot, and with a little love, patience, and a super-sweet Hemi engine from nowhere, these farm-fresh vehicles become respectable muscle cars that any of us would be honored to park in our garage.

Not that we would park it very often, of course. Each of us vows that if we had a beauty like that, we’d cruise it every chance we got, take it to car shows, let it tool around the track a bit. If we had a car like that, we would treat it right.

At the same time, most of us won’t have the opportunity to rescue a classic muscle car from a barn, dilapidated garage, or random Quonset hut in Louisville, Kentucky. And that’s why we get extra excited when someone actually does.

Say hello to this 1969 Dodge Charger Daytona. Unlike so many cars in its place, we actually know the full history on this one, which is what makes its factory-fresh resto story that much sweeter.

A Look at the Dodge Charger Daytona

The 1969 Dodge Charger Daytona is one of those magical cars that nearly anyone can look at, regardless of their gearhead status, and say, “That is a fine-looking car.” From its sneering nosecone to its towering spoiler, the Dodge Charger Daytona was one of Mopar’s most successful “Winged Warriors.”

Only 503 of these special Dodge Chargers exist, because they were targeted for the NASCAR circuit. Essentially, Dodge engineers wanted to create a Charger 500 that was even more aerodynamic for better success on the track. So, they put the Charger R/T coupe in a wind tunnel and let physics explain the rest.

Both the Charger and its fellow Winged Warrior, the Plymouth Superbird, were given a variety of mods from a custom fabrication business known as Creative Industries. The first thing they did was address front down force with those huge extended nose cones. It may look like something out of Wacky Races, but that sharp, extended nose slices through air like a knife.

Then came the rear. Add in a flushed rear window and a body-attached rear wing that measures nearly two feet tall, and engineers managed to coax physics out of its own game. The coefficient of drag of the standard production 1969 Charger is around 0.28.

Of course, you have to have speed to back up unique aerodynamic styling. Thankfully, the Dodge Charger Daytona was given a standard 440 cubic inch/ 7.2L Mopar Magnum V8 big-block engine. Paired with a four-speed manual transmission or a three-speed Torqueflite automatic transmission, this 390-horsepower, 490 lb/ft of torque engine would do the trick for many drivers. But why not offer a 425-horsepower, 426 cubic-inch Hemi V8 engine on 70 of the 503 Daytonas built, just in case?

The 1969 Dodge Charger Daytona was so good at its job that NASCAR had to ban it — and all the other Winged Warriors — for the 1971 race season. The Plymouth Superbird, Ford Torino Talladega, and Mercury Cyclone Spoiler II were all uninvited from the race track, limiting entries to cars with engines smaller than 305 cubic inches.

Thankfully, before the ban was enacted, driver Buddy Baker had the rare opportunity to be the first driver to break the 200 mile per hour mark, piloting the No. 88 Chrysler Engineering Dodge Charger Daytona to super speed at Talladega Superspeedway on March 24, 1970.

The once proud race car was now relegated to being “just another” hot muscle car that went faster than the regular street speed limits allowed.

Back to the Barn

Given its tragically short production life, it stands to reason that most of the 503 1969 Dodge Charger Daytonas created did not get soft, cushy landings.

But, some held out on fate long enough to see a new era of appreciation, like this spectacular barn find.

On May 3, 1975, this Daytona was being driven home from Churchill Downs by Ernie Bingham. A non-serious accident with another driver left the left side door and quarter panel damaged, and Ernie made the difficult decision to sell the car to buy something that had an opening and closing door.

The Daytona shared a Quonset hut with a 1969 Camaro Z/28 until 2005, when the land they were living on was foreclosed upon, and everything sold for a song.

It turns out, not many people know about the Winged Warriors, and it was a chance conversation between the car’s latest in a chain of owners and Tony D’Agostino of Tony’s Mopar Parts in Delaware that essentially brought this car back to life.

From Shed to Showing Off

While pristine Daytonas with the Magnum engine often fetch prices in the six-digit range at today’s auctions, this one was definitely not in that price bracket. However, Tony bought it for $75,000, which is still considered a pretty good deal.

Tony paired with Mike Mancini of American Muscle Car Restorations in Rhode Island to bring this particular 1969 Dodge Charger Daytona back to showroom specs. In doing so, they tracked this particular Charger back to its roots to discover that it was one of only two red-on-white models featuring both the 440 cubic-inch V8 and automatic transmission.

Now, this was way back in 2011, before Mike Mancini was a household name. This car was “make or break” reputation material. And it managed to score 999 out of 1,000 at the 2012 Muscle Car and Corvette Nationals.

To celebrate their success, Tony and Mike took the red-on-white Charger Daytona on a Mopar tour of the US. And while on this tour, who should happen to spot this particular vehicle, looking more like brand new than the day he bought it, but Ernie Bingham.

Now, we’d love to end this with Ernie grabbing the keys to the former love of his life and blasting off into the sunset at 200 miles per hour, but it’s not quite that kind of story. Instead, Tony took the Charger to the January 2020 Mecum Auction in Kissimmee, Florida, where it sold for a record-setting $346,500.

So for everyone waiting for their dream car to be unearthed in a barn somewhere in rural America, don’t stop believing. Your day in the sun will come, too. Unless you have a cool $350k, and then you can just call Tony and Mike and see what they can rustle up for you.